Advantage:
Siegmeyer has some of the best defense in the whole game While Joshuna Graham is harder to kill, Siegmeyer is harder to hurt, his armor rendering him resistant not just to damage but also combos, injuries, called attacks, wounding you name it. He has high Con, boosted slightly by his rings (though a total of +6 hit points doesn’t add up to much in the long run, it can help) and his armor is a constant. Dealing solid damage on him is very tricky, particularly when he has slight magic resistance. The Shield also allows him defensive options.
He also has a higher than expected intelligence, specifically in the realm of military planning, and can help out with tactics. His magic armor is immune to armor piercing, and ranged weapons are almost entirely worthless against him.

He also deals a massive amount of damage, he can wield his Zwiehander one handed and makes it hurt more than most people using it two handed due to his incredible strength, and has a spiked shield he can use for closer enemies. Hits hard, can take hits, what more do you want? Also very minor elemental resistance.

Disadvantage
Well you could want speed actually, because Siegmeyer is slow as shit. He can only attack once per round, once more if you count the shield, and he has no mobility techniques. He can’t dodge for shit, and can only move a little bit each round. his extremely limited vision makes him worthless outside of combat for anything except military tactics. He also wears useless rings if you complete his quest, so you can’t even reduce his time. Should an attack be able to ignore his armor, he has high HP but not much else and can die easily. Also Siegmeyer can suffer moral failures if at a quarter of his health he will go fully defensive. He also almost always goes dead last for initiative. 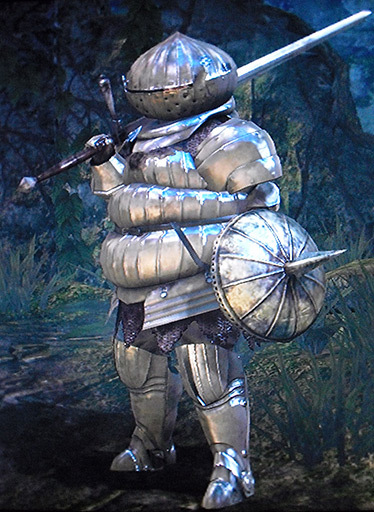