A Modron who has gained free will

This modron seems to be subtly different from the others you have seen. It carries a pair of crossbows in its four arms, and it seems to be taking an active interest in your behavior.

You’ll first encounter Nordom while making your way though the “Hard” level of the Rubikon dungeon. Simply strike up dialogue with him, which will eventually lead to his offer to join your party.

Superior lost in field test. Superior = Nordom? After exposure to Plane, perspective has deviated from norm. Perceptions have become smaller and louder. Wings have been replaced with arms: reason unknown. Suspicion/hypothesis: not liked wings? Speculation.

Nordom was once “one” but am now smaller, louder “one.” Processing information difficulties.

Two spirits of Rubikon gears assist Nordom. Transformed these- selves into weapons to defend against Rubikon errors. Their query: leave this place and shoot other hostile sentients (goal: adventure?).

Personal Quest: A band of Modron wish to destroy him because he violates their duty 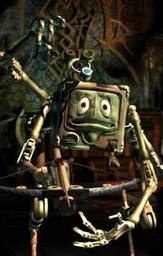