The Celebrant
+4 Horse Sword, +2 Strength, +2 Wisdom
The Grand Tourney is the oldest, and perhaps only, tradition of the Free Marches. On those rare, one-in-a-thousand days when a Contest of Arms may be called, every Marcher unites in fellowship to witness the birth of a new champion.
Contestants come from all over Thedas. Minrathous alone always sends no fewer than two dozen entrants hoping to claim the honor for the Imperium. Once, the champion was an Avvar mountain man. Twice in a row, it was Talisa of Sundarin, a lady knight from the Anderfels—which scandalized the crowd, created endless drama amongst the participants, and therefore got her declared the “Most-Loved Champion in the History of the Tourney”.
Each champion is presented a crown of sage leaves and a sword. The leaves wither, of course, as a reminder that all victories are fleeting, but the blade, Celebrant, endures and has passed from champion to champion since the first, inscribed with the names of each victor, a reminder that legend is eternal.

—From In Pursuit of Knowledge: The Travels of a Chantry Scholar, by Brother Genitivi

Commissioned by an infamous Nevarran dragon hunter, this armor was crafted in a time when dragons had almost been hunted to extinction. Infused with the beasts’ blood, the armor gained notoriety after the hunter died at the hands of men rather than the dragons it was designed to protect him from.

Divine Justinia II gave these enchanted rings to her templars to aid in the chantry’s work.

When equipped with the Blessing of the Divine, the character gains a bonus to health regeneration

Blessing the Divine
+5 to Will saves, 10% spell Resistance
Divine Justinia II gave these enchanted rings to her templars to aid in the chantry’s work.

When equipped with the Mark of the Divine, the character gains a bonus to health regeneration. (10 hit points per round)

The Spellward (Amulet)
3 to Will saves, 8 regeneration per round, 30% spell resistance, +1 to dodge (2 against ranged attacks)

Templars assigned to hunt the most dangerous apostates and blood mages treasured this amulet above all else. The circumstances through which it left Chantry control are better left unconsidered 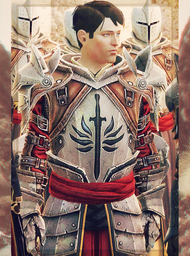