An ex assassin with a death wish.

Death: After fighting at the High wall, Zevran was wounded and had to pull back behind the lines. On his way back, he realized that a band of assassins were trying to break through to slaughter the mages while resting. He launched an attack, and despite the fact that it was his old comrades, the Crows of Antiva, he slaughtered the whole group before dying. 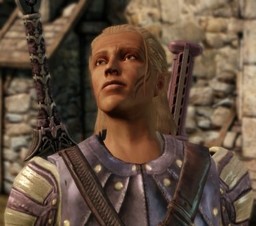