Yoon always loved fire—the warmth, the color, the brilliant blaze. Fire always changed, and changed everything around it. Yoon could empathize. Fire was also always hungry—Yoon could empathize with that, too, as her family were immigrants in Minkai, and struggled to support themselves.

Not long after Yoon learned to walk, she learned to climb, and immediately took a shining to the rooftops of Oda. Her father only brought her to the city for the big festivals, and she wanted the best view to watch the fireworks celebrating the Lady of the North Star. Once, when she was climbing, Yoon fell, dropping into the river, and her father had to fish her out. Yoon coughed up a seemingly endless stream of water, and her grandmother scolded her, saying it would have been far worse if Yoon had hit the ground.

Yoon’s mother had been a brave warrior and explorer, and had told Yoon many fantastic tales of adventure and faraway places, primarily in the savage lands to the north. She also brought Yoon things, like the stuffed bear-owl creature named Gom-Gom, or the crooked stick used to play a strange northern game. Yet one day, her mother failed to return. Yoon and her father waited, growing more anxious as each week. When at last a messenger arrived and confirmed her mother’s death battling siyokoys, a grief-stricken Yoon decided that no one else would ever call her by the same name her mother had. Forsaking her old name, she insisted on being referred to only by her mother’s family name, the one her mother’s adventuring companions had called her—Yoon.

Gom-Gom, Yoon’s stuffed owlbear.
Gom-Gom was the first to accept Yoon’s new name. Eventually, even her grandmother gave in, though she continued to sniff at the impropriety. Yoon’s grandmother had been a palace servant to the Shojinawa family once, and despite the fact that Yoon was determined to become a warrior like her mother, the old woman insisted on teaching her about things like poise, discipline, and self-control, arguing that they were just as important to a warrior as to a court scholar. Yoon didn’t quite believe that, but did her best anyway, proving a quick and capable student.

Yoon’s father fared worse. Still a loving, caring parent, he grew distant and sad after his wife’s death, and spent more time muttering about things like imperial taxes and yakuza corruption. The new friends he made were constantly grouchy, and Yoon came to think of them privately as his Bitter Friends. They spent long evenings drinking and arguing in low voices, always careful to keep the windows closed and doors locked, even in the worst summer heat.

One night, as Yoon was once more watching fireworks in honor of the Lady of the North Star, her father went off to meet those friends. Yet even as the colored stars burst overhead, a new light blazed up to the east—a burning warehouse! Yoon went to watch the citizens fight the fire, but when she arrived, she found the place surrounded by imperial soldiers. Not only were they not helping put out the blaze, they were actively preventing those inside from fleeing. An uncomprehending Yoon wept to hear their cries, plugging her ears against the crunch of tetsubos on bone as the soldiers beat back burning men and women and their captain issued a proclamation about the punishment of Hwan rebels.

That’s when Yoon saw her father.

He was in a knot of his Bitter Friends, blackened with ash, struggling to break through the ranks of soldiers. Even as Yoon called his name, she saw him fall beneath the soldiers’ blows.

Screaming, Yoon raced for the line of soldiers. She might have gone unnoticed in the din, if not for the flaming board she scooped up and hurled at one of the soldiers, striking him in the helmet. As the man crumpled to the ground, several of his companions turned toward her. Yet as they advanced, truncheons raised, Yoon found her view suddenly blocked by her grandmother, wreathed in a snaking cloud of eerie black flames.

“Run, child!” the woman commanded. “If you listen to me only once in your life, run now, and don’t come back!”

Yoon ran—through the city, out the gates, and into the surrounding fields. Only when she could run no farther did she finally collapse, exhausted, into the grass, listening to the night breeze and the song of insects. Behind her, the fireworks still continued, but the brilliant lines and stars no longer held Yoon’s attention. As she held up a hand, little flickers of black flame flared into life around it. Her own tiny fireworks.

Her grandmother had commanded her to leave. Yoon understood that. She had struck a soldier, and no one harmed an imperial soldier and lived. But where should she go? She had always wanted to see Hwanggot, her family’s homeland, but it lay across the water to the southwest, and there was no way Yoon was crossing that much water. In a sudden flash of inspiration, she decided to head north, up through the Forest of Spirits, then down along the mainland. She would be an explorer, like her mother. And she wouldn’t have to be scared. After all, she still had her two oldest friends—Gom-Gom and fire. Between the two of them, they’d protect her.

Yet while a stuffed animal and a magical flame can handle a lot of problems, they weren’t truly equipped to handle all Yoon’s needs, and she might well have starved to death in the ensuing days and weeks if she hadn’t fallen in with a mysterious traveler. Seemingly waiting for Yoon at a crossroads, the man spoke to Yoon of her powers, helping her come to understand them even as he taught her to scavenge and forage for food. Yet his greatest gift came on the slopes of the great volcano Kumijinja, where he called forth the spirits of the mountain’s fire, presenting Yoon to them like a visiting dignitary. As the kami touched her, Yoon felt something inside her shift, and the flames that roiled inside her emerged, turning from black to a brilliant red. In that instant, she understood the fire she carried, and it understood her. When she woke from her trance-like reverie, the traveler was gone, leaving Yoon to continue her journeys alone—a child in age, yet armed with the courage of her mother, and the fiery wisdom of the mountain

Dies: Ironically enough against Sikyokoys after fighting free from a band of enemy casters. 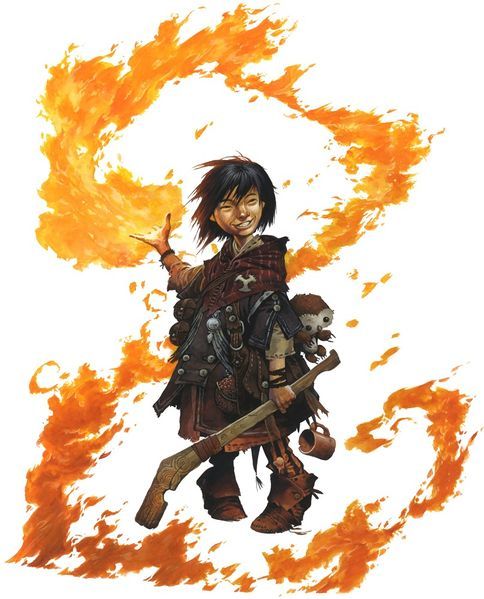