When asked about his past Xzar has very few coherent things to say. His desire to determine the cause of the iron shortage seems benevolent enough, but his motives remain unclear. His ramblings seem disjointed, but his faculties are obviously in good enough order for him to be adept at magic. He mutters something about how he and his associate Montaron are in the employ of a powerful group, but when pressed for details he gets extremely agitated and does not speak for some time. He is obviously at least partially insane, and the network that would hire him must be dark indeed. Xzar is both intelligent and insane at the same time; his treatment of others is most commonly coldly disdainful or derisive, but fairly often he also lapses into bouts of what to everyone else is nonsense, ranging from acting like a frightened child to remarking that he ate someone’s liver “with a nice chianti and some fava beans”. He’s partnered with Montaron against both their wills, and they will not be separated if they can help it, each following the other in joining or leaving the player’s group.

Group Quest: Montaron is kidnapped and transformed into a dove

Personal Quest: A band of Zhents are trying to destroy his organization, and want to wipe him out.

Death: He dies fighting against a group of Helmed Horrors 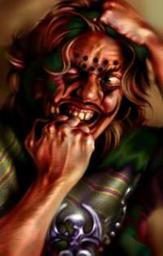