A depressed elf who just kinda goes along with things......we are all doomed

Special: wield a Moonblade, which works only for him, giving him a +3 to attack/damage, +1 to AC, and 50% fire resistance

Xan wistfully speaks of his home in the elven stronghold of Evereska, and his role as a Greycloak. It was apparently decreed that he was to investigate the events of the iron shortage, determine who or what were the causes, and ascertain whether there was a greater threat to the region as a whole. This was definitely not a small task, and he accepted the responsibility with a great deal of dread. You get the feeling, however, that he approaches everything with a great deal of dread. He has devoted his life to improving his mastery of magic and has become a skilled wizard, though this dedication has left him little time to make friends or acquire any other pastimes. He strikes you as very capable, though probably not the best influence on morale.

Romance: yes, though extremely hard. He is bi and will romance any elf of at least 15 intelligence

Personal Quest: An ancient book of his people has be discovered among some ruins, and he would like it if you would help him retrieve it.

Death: Captured as a slave, he is able to escape and get his hands on his moonblade. With his enchantment spells, he is able to cause chaos in the jail, eventually leading to a mass killing and jail break, however he stays behind to let the other prisoners escape. He manages to kill a band of Orogs through a mix of wands, scrolls, and his moonblade before dying. 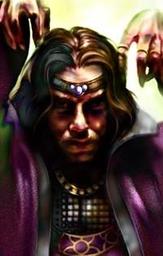