Demon Sword
+5 Sword, should it deal even numbered damage it deals 50% more damage
Little is known about the demon sword. It requires a powerful mind to control it, but its damage is greater than any single sword.

Gem of Unity
+3 Vigor, +3 Insight, +3 ReasonTo find true unity, one must set aside one’s egotism and know that all are one. The shared fate of the entire Empire matters, not that of the individual. The strength and sacrifices of the Empire’s greatest heroes empowers those who would tap the power of this gem."

Gem of Brilliance Balance
+4 Spirit, +4 Body, +4 Reason
“No matter what a person’s path in life, fate, destiny, and human desire decide how far one goes. Whether on a path of peace or of power, the will must exist in balance with the needs of the body, the mind, and the spirit. When all are one, then true mastery can be achieved. this gem allows its wielder to balance the forces within, strengthening the whole.”

Warrior’s Gem of Fore sight
+2 Strength, can never use health regenerations
“A battlefield is chaotic enough without leaving one’s successes to chance. Some warriors prefer to rely upon solid and predictable strengths rather than the random chance of respite during battle. This gem strengthens the wearer’s inherent physical abilities, taking away the warrior’s reliance on fate to provide assistance.”

Monk’s Gem of Foresight
Insight +2, no Chi power ups
To some, being prepared for any situation is the very essence of wisdom. While the world rewards those who excel, many warriors find that relying upon these rewards can lead to laziness and recklessness in battle. Only by bolstering one’s natural spirit can one truly master the art of shaping one’s Chi. This gem strengthens its wielder’s spiritual reserves, but it removes the temptation to rely on the untrustworthy whims of fate."

Scholar’s Gem of Foresight
Reason +2, no chance of Focus powerup
The concepts of mental focus and of distraction are mutually exclusive. Many believe that one cannot succeed in a mental capacity by always relying on the subtle whims of fate to fuel one’s success. This gem enhances the wearer’s inherent mental abilities while weaning the warrior from reliance on fate’s fickle favor."

Gem of Pure Flame
Mind +3, Will +3
“Flame can destroy, but it can also purify. Burning with inner fire and zeal, users of this gem find themselves more focused in battle and better able to tap their spirit’s reserves.”

Superior Charm Gem
+5 Charm
“This gem surrounds the user in an aura of vitality that people find irresistible. This gem is of superior quality.”

Good Fortune
Intuition +5, Reason +1, Insight +1
Master Gambler Wu Pin was the scourge of betting houses across the Empire. Rumor has it that one would never know he was present until it was too late, because he would always lose every single game until the very end, when he would reach into his pocket and finger his lucky gem, which would bolster his intuition and bring him victory in the final, and most expensive gamble."

Gem of Premonition
Halves Focus cut by traps, +1 Mind T
his gem’s inner structure does not appear similar to any other essence gem, and there are no records of it ever having been created. Its origin is a mystery, as is the nature of its power. It appears to give the wielder a glimmer of the future, enabling its user to move away from coming harm. It does not remove the danger, but makes danger easier to avoid."

Wu’s possession of the Jade Dragon Amulet has made her one of the greatest martial artists in the world. That isn’t to say that she isn’t extremely powerful in her own right, however her extreme dedication in collecting and obtaining the most powerful gems for her amulet means that is far more powerful than she actually is, and fighting her is considered paramount to suicide. If somebody can get her sword, or even more importantly her amulet away from her, she would be a still tough but much easier foe. 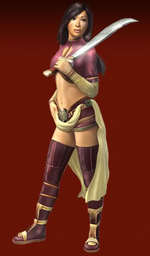