An ex brotherhood member trying to find a new way for life.

God: ???
Organization: The Followers of the Apocalypse, The Brotherhood of Steel
Sexuality: Homosexual

“
With regret comes a girl… smiling sad, brown robe, name Veronica, half here. Wraps her and her heart up like a pack, in the pack, a key, some say. Forecast: Cloudy, with a chance of friendship. Icon sound trigger
”
— The Forecaster
Veronica is a Brotherhood of Steel journeyman scribe who has been indefinitely assigned to the role of “procurement specialist”, responsible for venturing out of the Brotherhood bunker to find and acquire resources that the Brotherhood cannot create on its own such as food. Irritated by what she sees as the Brotherhood’s unrealistic and uninformed views of themselves and the world, Veronica is a perpetual outsider caught between her loyalty to the Brotherhood and troubling doubts about the validity of their current course.
Veronica was born and raised in the Brotherhood. Her father was a paladin, her mother a scribe. In her youth she fell in love with a woman, but Father Elijah split them up. Because the Brotherhood is not open to outsiders, many of its members felt that it was their duty to procreate and frowned upon same-sex relationships. Later in dialogue, she laments that both of her parents were killed in the same battle defending a position whose name and significance she no longer remembers, saying “Guess it seemed important at the time.”

After following the Brotherhood to the Mojave Wasteland from California, Veronica became disillusioned with their goals. The Mojave Chapter’s Elder and her personal mentor, Elijah, had changed the direction of the Brotherhood somewhat by dispatching Scribes to recover beneficial technology instead of just weaponry, but after he abandoned the Brotherhood after their defeat at HELIOS One, his successor, Nolan McNamara, upped stakes and holed up in the Hidden Valley bunker, dispatching scouts only to assess the threat posed by the NCR. She felt that McNamara was too much of an isolationist, and by hiding away and hoarding technology instead of using it to win favor with the people of the Wasteland and attract new recruits, he was just going to “wait in a hole for everyone else to die”.

Veronica felt that if the Brotherhood was to survive, things were going to have to change. She began to speak up about her beliefs, questioning the direction the Brotherhood was taking. In order to keep her out of the Brotherhood’s hair and to stop her dissent from spreading, the Head Scribe sent her on longer and longer excursions out into the Mojave, allegedly to collect resources. It is on such an excursion that her fateful meeting with the Courier occurs.

Beyond the Beef: The player can offer Veronica to Mortimer as a substitute for Ted Gunderson for the banquet.
I Could Make You Care: Veronica will ask the player to take her to Hidden Valley, where she will talk to the Elder about the Brotherhood’s collapse, and how it will need to grow and change to stay alive. The player is then asked by Veronica to find some technology to convince the Elder.
If Veronica is convinced to leave, the player will have to go to the Follower’s outpost and talk to Alvarez in getting her to join the Followers of the Apocalypse, but the doctor who decides who joins the Followers of the Apocalypse is out for the day and the player will then have to wait a day. After waiting a day, a few rogue Paladins have destroyed the outpost, killing everyone. She then blames herself for what happens. Afterward, she earns the Causeless Rebel perk, giving her an increase of attack rate by 30%.
If she decides to stay, the quest is completed and she will gain the Bonds of Steel perk, giving her +4 DT.
You Make Me Feel Like a Woman: Veronica has a long-held dream of wearing a dress. Giving her formal wear will make her very happy, and in return she will teach the player the special unarmed move, Scribe Counter. This can be completed by adding White Glove Society attire or formal wear to her inventory. The attire can be removed from her inventory without penalty after the courier obtains the Scribe Counter.
Effects of player’s actionsEdit
If you talk negatively about the Brotherhood in your first conversation, she won’t join you, and when you talk to her again, the only speech option you have is “Goodbye”.
If you have destroyed the Brotherhood Bunker in Hidden Valley before recruiting her, she will come up to you and ask you what you know about the Brotherhood at 188 trading post. If you tell her what you did, she will say “Well in that case: This is for them.” and attack the player.
Veronica will leave you if your reputation with the Brotherhood of Steel drops to Vilified. However, it seems that with a reputation even as low as Merciful Thug, she will continue to happily accompany you on your travels. It should be noted that she will remain a companion upon destruction of the Hidden Valley bunker, although she warns it is your last chance, similar to what happens with Craig Boone if you work too closely with the Legion, or Rose of Sharon Cassidy if you gain negative Karma while she is your companion. Destroying the Brotherhood of Steel by activating the bunker’s self-destruction option will drop the reputation to Vilified, making Veronica leave your party even if she chose to leave the Brotherhood in her companion’s quest. To prevent this to happen, kill all the Brotherhood members without activating the self-destruction option. Little to no reputation will be lost and Veronica will continue on your party.
Veronica will enable the player to access Hidden Valley on much friendlier terms without being stripped of gear, having an Explosive collar put on and having to get rid of Ranger Dobson from one of the bunkers. Without her, the player will have everything mentioned before done to them and will have to get rid of Dobson from Hidden Valley to prove that the player is trustworthy.
If you complete her companion quest in favor of the Followers of the Apocalypse, Veronica won’t enter the Brotherhood bunker anymore.
If the player equips NCR faction armor while Veronica is a companion she may warn the player that it is their last chance.
Other interactionsEdit
If you give her formal wear or any pre-War outfits, she will say one of the following lines randomly:
“Aw, you shouldn’t have. It’s just my taste. Thank you.”
“Hey, a dress! Thank you! I’m totally trying this on later.”
Giving Veronica formal wear will complete the quest You Make Me Feel Like a Woman. See the quests section for full details.

Death: Dies fighting against a band of Enclave soldiers. 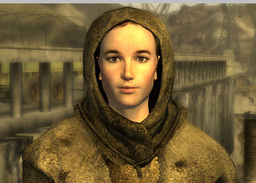