A Samurai who is totally fucking lost

One of the four people that you thaw out during the abduction exploration on board Mothership Zeta is a silent and stolid man named Toshiro Kago. His lack of English, and your inability to converse in Japanese, mean conversation is never more than stilted gestures. Paulson refers to him as “the Chinaman,” until Sally corrects him. It appears Kago is a Samurai warrior, and well-skilled in sword combat. His armor appears to date from around the Azuchi-Momoyama period (1568-1603) suggesting that aliens have visited the Earth throughout history. He is more than capable of slaying aliens if a particular ceremonial blade is presented to him. Or he can be slain without your other allies protesting.1
Origins
Toshiro Kago is from Japan, born sometime before 15622 and participated in many battles for the Oda Clan.3 After the decimation of the Oda clan, he fought for one or more other unknown clans during the Azuchi-Momoyama period (1568–1603).1 Also, during the Tokugawa shogunate (1600–1868), Toshiro chose the “wood sorrel” mon for his name4 and placed it on his okegawa dô. 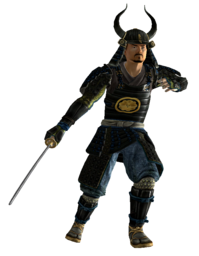