Granite is a sergeant that leads a squad of the Enclave control company. Granite values his life and when faced with the dilemma of dying for a failed cause or surviving in the wastes, he can be convinced to turn against Horrigan.
He and the EC crew hopped aboard the tanker, and escaped to the mainland after watching the fireworks from the top of the tanker, whispering “gawd-damn” to themselves and throwing suggestive glances at the women from Vault 13 and Arroyo. After reaching the mainland, they headed north to Navarro and were never heard from again, though their adventures could fill several eras worth of pulp comics. 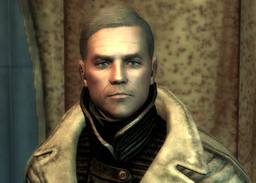