A wanderer who wants vengeance for his murdered wife and daughter

Slick Gem
Reduce Focus Cost by 10%
The surface of this gem is oddly slick, making it difficult to hold. Prized by thieves, it makes one move with less resistance, making it much easier to avoid the unavoidable. It has saved many an inattentive burglar from death.C63"

Sky is a self-proclaimed ‘wandering spirit’. Early in his childhood he decided not to be shackled down to laws of society and went where he pleased. Although a friendly person, he was not above petty robbery in order to make a living. On his travels he became acquainted to a woman who lived in the same style as he did, going where the wind took them and doing what they wanted. They decided to get married and to have a child. Sky’s wife died in childbirth, but their baby was unharmed. Although he mourned his wife, he looked upon his new daughter, Pinmei, as a gift and decided to settle down into a more stable life to raise her. Pinmei was captured by slavers at the age of five from Sky’s farm, near the town of Tien’s Landing, when Sky was away on business. Sky desperately followed her tracks until he found her body on the roadside. According to him, she was always a fighter, and the slavers probably considered her too much trouble and killed her. Sky’s quest for vengeance lead him to discover that the man responsible for the slaving operation was the influential businessman Gao the Greater who appeared to be cooperating with the Lotus Assassins, and was residing on a pirate island near the town of Tien’s Landing. After traveling to the island, Sky met the PC who killed Gao the Greater. After finally having his revenge, Sky decided to travel with the PC, one who he considers would attract the attention of the Lotus Assassins and give him the opportunity to further exact revenge for his murdered daughter.

Personal Quest: His daughters Ghost needs to be put to rest

Death: He dies fighting against a band of Lotus Assassins 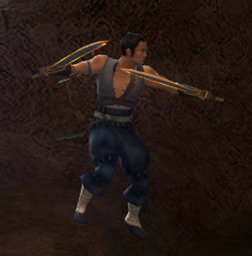