A bookish, nervous mage who is frighteningly capable when backed into a corner

An apostate elf who joined the mob to avoid the Templars

Death: Acting as a support mage for one of the militia units, he was the sole survivor when his position was overwhelmed. Fleeing, he ran into a band of enemy Minstrels, who were determined to attack and destroy one of the Allies mage headquarters. Accidently getting in their way, Sketch proved to be frighteningly competent when backed into a corner, and destroyed most of the band, dying just reinforcement arrived to clean up to finish the job. 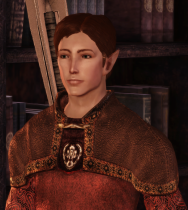