A sociopathic convict who has escaped and wants revenge

Throughout his life, Skadge excelled at muscling his way to the top. As his crimes mounted, Skadge earned a reputation as being utterly ruthless. It did not take long before the mere mention of his name struck fear into the most hardened criminals across the galaxy. But his violent and uncontrolled behavior eventually caught up with him, and soon Skadge found himself banished from his homeworld.
For the next few years Skadge worked as hired muscle for the Hutts, making examples of whoever had the misfortune of missing a payment or owing them money. Although he was effective, the Hutts saw his brutality affecting their bottom line and attempted to end their contract with Skadge from the end of a rifle.

They failed, and once he learned who was responsible for the attempt on his life, Skadge blazed a path of death and destruction throughout the Hutt Cartel, leaving the bodies of whoever he could grab in his wake. He fled to Coruscant, wreaking mayhem and destruction across the undercity of Coruscant until a combined force of Coruscant, Republic and SIS forces. brought him down and shipped him off to one of the most secure prisons in the galaxy where he would spend the next three years in solitary confinement.

Now free, Skadge hasn’t forgiven those who have crossed him, and he certainly has not forgotten them.

Death: Dies fighting against a band of Blue Slaadi 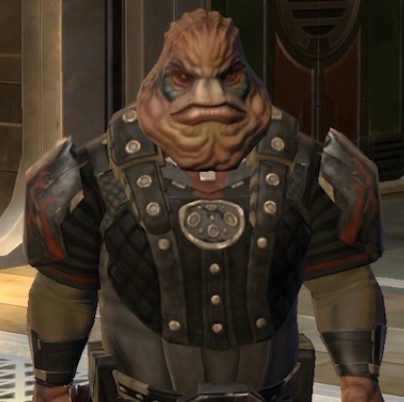