HOly Sword of the Order: This +3 Robe Sword counts as +4 against non human humanoids.

Geralt first meets Siegfried in the sewers of Vizima while they are both on the hunt for a dangerous cockatrice. The knight suggests that they join forces to defeat the beast (and deal with drowners), and Geralt decides whether or not to go it alone. Either way, after the cockatrice is slain, both Geralt and Siegfried are ambushed on their way to the surface by Salamandra agents. After these are defeated, Siegfried sarcastically asks whether they were friends of the witcher’s, then on a more sober note mentions a friend who might be of service: Raymond Maarloeve, private detective.

Siegfried spends most of Chapter II at his post (if he and Geralt joined forces in the sewers, this is the Order outpost north of the Cloister; if not, it is at the front entrance to St. Lebioda’s Hospital), at one point making a brief excursion to the swamp – but first, he waits by the gate to the dike until he has helped Geralt past its guards. He can also be invited to Shani’s party.

In Chapter III he is posted before the Cloister’s main entrance, and can be consulted regarding a couple of quests. He will not be encountered in Chapter IV.

In Chapter V and the Epilogue, Siegfried is a key ally if Geralt has consistently supported the Order, but a sworn enemy if the witcher has thrown in his lot with the Scoia’tael.

Siegfried of Denesle, a knight of the Order of the Flaming Rose, is an idealist who adheres to the Order’s rules but is not devoid of common sense. Polite and open, he is unlike many of his brothers from the Order in that he is not prejudiced. He is undeniably courageous and demonstrated this when he descended alone into the sewers to fight the cockatrice.
Siegfried and I defeated the cockatrice together. The knight proved both polite and a skilled swordsman.

I have a feeling Siegfried is starting to see through his own misapprehensions. He has realized that killing monsters will not eliminate all the evil of this world, and his duties towards the Order sometimes force him to choose the greater of two evils. During the bank robbery in the Trade Quarter, I opposed Yaevinn and his forces together with Siegfried. The attack reinforced the knight’s conviction that the Order’s dislike of non-humans is justified.

I asked Siegfried for military support during the assault on Salamandra’s headquarters in Vizima. The knight, who was among those invited to Leuvaarden’s party, agreed to help me break up the organization.

if Geralt does not side with Yaevinn in Force Recon:

The knights led by Siegfried defeated the Scoia’tael during the clash in the Golem Burial Ground.

if Geralt chooses the Order path:

On the hill under the Old Manor, during the fight against Salamandra, my friend aided me again.

if Geralt chooses the Witcher / neutral path and decides to kill Siegfried.:

Siegfried of Denesle died by my hand when he stood between me and the Grand Master. He remained loyal to the Order of the Flaming Rose to the very end. 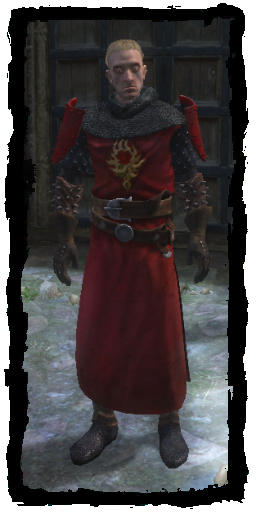