Fortune Favorite +2 Jin Sword. Gives a +1 to Vigor
This long sword bears the mark of Shining Fortune, the blacksmith of the gods. Shining Fortune’s weapons were so finely crafted that the gods forbade him from creating weapons for anyone but them. When his son was enlisted to subdue the barbarians from the west, Shining Fortune forsook his oaths and forged this marvelous long sword for his son. The gods cursed Shining Fortune for breaking his oath, and he was never again able to produce weapons of any worth. Still, the blade he made for his son never experienced defeat. It is truly Fortune’s Favorite.

“Rumored to be the eye of a great demon lord who fell from his place in the Celestial Bureaucracy, this great gem channels its wearer’s dark intentions into an immense inner power, fueling the wielder’s dark deeds from within.”

The Closed Fist
Will Power +5, Vitality + 10
A master of the Closed Fist is a force that changes the face of destiny to suit his will. Those who seek the ways of power will always remember such strength of purpose. A fearsome force in body and spirit, this path brooks no deviation. the slightest weakness in a master of this caliber will be his downfall. Those who change fate accept no failings.

Cyclone Rage
Deals 1D6 damage to anybody who makes a melee attack upon the wielder, closed fist only
Among the first monks who developed the Tempest style, there was one who began to question the Closed Fist tenets of his order. Ostracized from his ruthless order, the monk sought new ways to harness the wind without relying upon Closed-Fist chaos. By focusing his hatred for his old order into a handful of small stones, he managed to replicate the power of Tempest in those stones. A stone of this type surrounds the wearer in swirling winds that whip and tear at any who harm the stone’s wielder."

Gem of Evil Thoughts
Influence +2, Charm +2
The evil energies that resonate in this gem speak of its previous owners, dark and evil men and women driven beyond the boundaries that society imposes on them. This is a gem of murders and thieves. Their thoughts and skills are reflected through this gem and passed on to its user."

Death: Dies fighting against a band of Horse Demons 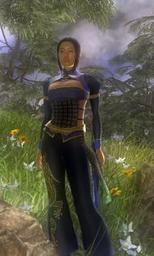