aria is the first of the Kokiri to greet Link after he receives a fairy of his own. She congratulates him for finally finding a fairy and is surprised to hear that the Great Deku Tree has summoned Link, as it is a great honor to speak with him.4 After receiving his quest from the Great Deku Tree, Saria meets Link at the exit to the forest to say goodbye. She gives him the Fairy Ocarina and asks him to come back and visit her.56
Once Link meets with the princess, he can meet Saria in the Sacred Forest Meadow to learn the song which she composed. This song allows Link to speak with her at any time.

Saria playing her Ocarina
During Link’s seven year absence, Mido kept spreading the rumor that Link was responsible for the death of the Great Deku Tree. Of all Kokiri, Saria was the only one who stood up for Link.7 When Link awoke, the Forest Temple in the Lost Woods became his first destination after an emergency call from Saria.8 On the way, he came through Kokiri Forest where the Kokiri informed him that both Saria and Mido had left to the Lost Woods.910 Following them, Link first encountered Mido, who refused to let him pass.11 However, after playing Saria’s Song, Mido understood that Link had to be one of Saria’s friends and as such could be trusted and let through.12 Link continued to the Sacred Meadow Grove and discovered that Saria’s “secret place” housed the entrance to the Forest Temple. Link went in, and after a lot of exploring and fighting, managed to defeat the temple’s evil spirit, Phantom Ganon. By doing this, he allowed the new Sage of Forest to awaken: Saria. Saria said goodbye, knowing that the carefree days of old were over,1 and gave Link the Forest Medallion.13
When Link later talked to Mido again, the latter asked him if he would help him keep a promise to Saria: to tell Link that Saria had been waiting for him, because she “really liked [him].”14 When Link even later defeated Ganon, Saria and the other Sages bundled their powers to seal away Ganon. During the ending, she could be seen overlooking a celebrating Hyrule on Death Mountain with the other Sages. 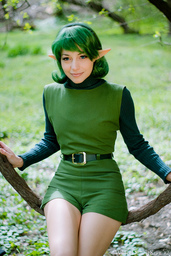