The path of the initiate is long and fraught with danger. For Rivani, the journey began as a young girl of twelve in the teeming city of Chendras, in the distant land of Vudra. Born the seventh daughter of a minor functionary in the court of a great rajah, Rivani seemed set to follow her sisters into a life of government service. Always a precocious child, Rivani took well to her studies, spending hours in her master’s library studying tomes she could barely comprehend. She especially favored lavishly illustrated accounts of harrowing victories over fantastic creatures, or voluminous surveys of distant lands and their many peoples, monsters, and mysteries. Rivani thrilled at imagining herself traveling to those distant lands as a questing hero, and soon these whimsical idylls consumed her every thought. As her revels grew more vivid, Rivani grew more distant from her sisters, putting her presumed future as a courtier at risk.

The rishis at court saw promise in the young girl’s whimsy, and implored the rajah to put Rivani to the Trial of the White Lotus, a simple test to determine a child’s mental aptitudes. After a series of intelligence and motor skill challenges, the rajah’s poets probed Rivani’s knowledge of the world’s esoteric nature. They were surprised to discover that Rivani’s reading had already set her on the path to spiritual development. She knew of the growth of the soul through reincarnation, of the astral body and the etheric double, and of the distant planes that house them. She knew also the rudiments of ki, the energy force that binds all living things into a spiritual family. In terms of esoteric theory, Rivani knew more than most third-year chelas. A promising child, indeed.

But it all came down to the Trial of the White Lotus. Following the minor challenges, the rishis brought Rivani to a secret room within the onion dome of the rajah’s highest tower, and there revealed a lush garden of fabulous flowers and colorful plants. Here was a verris bulb from distant Kaladay, there a purple jonquil from mythical Hermea. A massive quanlum bush—identical to the specimen allegedly recovered by Khiben-Sald himself on the far planet of Castrovel—dominated a far wall, next to a collection of ghorus seeds floating in a nutrient tank. And at the center of the room lay a pedestal, and on that pedestal a simple white lotus—Rivani’s final challenge.

“Cast forth your mind,” the rishis bade her. “Merge your life essence with that of the flower and realize that you and she are but tongues of the same flickering cosmic flame.” Rivani closed her eyes and concentrated on regulating her breath, relying on techniques she’d read inscribed upon an archaic manuscript of palm leaves by a lost yogi brotherhood. With each exhalation, she pushed her consciousness deeper beyond her physical body into the scintillating emanations of ki that comprised her health aura. At first, Rivani wasn’t sure if she simply imagined that it was so, but when her mind conjured the thought of her aura touching upon that of the white lotus, she felt her spirit lighten, and a beatific calm overcame her.

Sensing a breakthrough, the rishis instructed Rivani to infuse her ki with that of the plant, to meld her mind with its animating force and open its closed petals. As she considered their instruction, Rivani pictured the bulb of the lotus opening one petal at a time. From within the flower glowed a coruscation of colorful energy Rivani inherently knew represented the force of life itself. It flourished within the tiny cup of the white lotus, but it burned with an intensity that echoed that of the sun. At that moment Rivani realized—not just read, but truly realized—that all life, hers, the flower’s, even the sun’s, were but aspects of the same glorious creation. As her conviction grew deeper, as the petals of the white lotus opened faster and faster, Rivani became aware that her mind also opened itself one petal at a time. Sweat dripped from her brow, threatening to distract from her spiritual unfoldment by reminding her of the limits of her physical body, but still Rivani delved deeper.

In her mind’s eye, Rivani stepped further and further into the light until she could no longer distinguish herself from the flower. But she felt other presences, too. The poets of the court were also part of the fabric of life, and Rivani brushed against their innermost thoughts without even meaning to. She saw their anticipation, their pride, their amazement at her unexpected power. She saw too their betrayals, their scandalous secrets, and their venal, immoral ambitions. Rivani had passed the Trial of the White Lotus, but none of the rajah’s rishis celebrated her victory.

Instead, certain that her unexpected foray into their consciousness had revealed secrets that could threaten their status at court, the rishis proclaimed Rivani a mahatma reborn, the vessel of a world teacher consciousness returned to Golarion to guide the people into a new age. Just not in Vudra.

With the blessings of a rajah nervous about his advisors’ tales of Rivani’s mind-reading prowess, the rishis dispatched their blessed student across the sea to the Isle of Jalmeray, there to further study among the adepts of the Houses of Perfection. Each of the that institution’s three monasteries welcomed their honored visitor from the East, but the Monastery of Unblinking Flame in particular seemed most eager to accept her into their ranks. Even as far away as Chendas, Rivani had heard tales of the Houses of Perfection and their “impossible” entrance trials. Steeling herself for the test of a lifetime, Rivani prepared, as her books instructed, to outwit an efreeti.

Rivani stands at the prow of a ship in the Dimension of Dreams.
Instead, white-robed warrior monks escorted her to the monastery’s courtyard garden for an audience with Anandala, the order’s ageless sovereign. She denied Rivani’s entrance to study at the monastery, for she was to be a teacher, not a student. “Everything you could teach us you read in a book,” she said. “We have read books. Go out into the world and learn to live. Once you know something for yourself, come back to Jalmeray and teach us what you have learned.”

Thereafter, Rivani spent several months as a librarian’s assistant in Quantium before fleeing the city after becoming a pawn in the psychic espionage and infighting of the Council of Three and Nine. From there she ventured to Absalom, spending most of a year as a translator for the esoteric manuscripts department of the Forae Logos before conflict with a fellow librarian drummed her out on the streets. Although she still reads voraciously and is seldom found without a well-thumbed book or two, Rivani henceforth swore off finding the world’s secrets in musty libraries, and finally set out to make some discoveries of her own.

A life filled with so much travel has filled Rivani with a wanderlust that borders on fatalistic. Her relationships burn intensely but briefly, as she constantly guards against delving too deeply—accidentally or otherwise—into the minds of her friends and lovers. She seems always fixated on the next stop on her journey, and while of a generally kind nature and friendly demeanor, she takes it as a matter of faith that she will soon be moving on, and avoids long-lasting, deep connections with others. Rivani loves nothing more than to share stories of her travels and cultural explorations, and to receive the tales of others in return. Through all of this she’s begun to develop her own philosophy, but it will be many years, and many many more adventures to come, before she will be ready to share her wisdom with the world 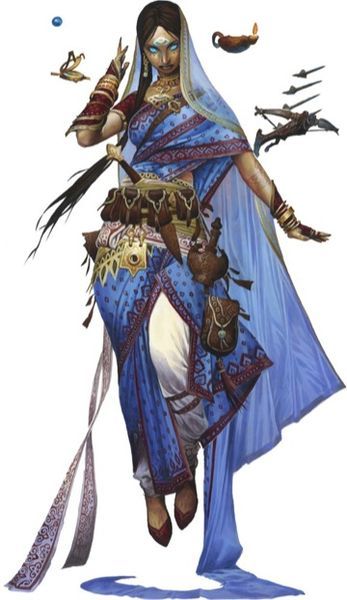