For a young man, Rasaad yn Bashir radiates an uncommonly mature aura of calm and wisdom. After a disastrous mission to a monastery in Athkatla, he now wanders the Sword Coast in search of enlightenment.

Orphaned on the streets of Calimport, Rasaad and his brother, Gamaz, barely survived by begging and theft. Caught in the act by a monk of the Order of the Sun Soul, the boys received not punishment but their first instruction. Soon the brothers excelled in the physical, mental, and spiritual training of the monastery devoted to Selûne, goddess of the moon.

In the aftermath of his brother’s death, Rasaad has left his order to seek his own solace. If he can also find opportunities to reflect his inner light on those in need, he is eager to do so.

Death: Dies fighting against a band of Glacier Yetis 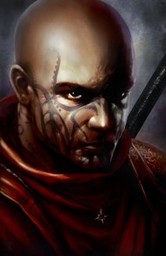