Basically its season 6 willow without the ethics.

Master Adventure’s Robe
DC 10
Former Royal Magician Vangerdahast to King Azoun IV of Cormyr was once an accomplished adventurer of high fame. One reason he became popular in wizardly circles was his creation of the Adventurer’s Robe. Mages have always struggled with the limitations placed on them by the ability to cast arcane magics. These robes give the mage an edge in surviving encounters with melee fighters by being able to absorb some damage from hits.

Enchantments abound in the realms of magic, but some have trouble with the incantations. This staff allows the user to charm or even dominate another, eliminating the need to study the spells. This was was given by a Rakasha in order to bribe a young apprentice into killing his master, providing him with the power his master could not.

Teeth of Firemane
+5 Darts, +7 vs. Beats, Magic Animals, animals
Sacred to Nobanion, king of beasts and ally of Mielikki, hated enemy of Malar – the Roar of Shadows infused these lion’s teeth with the strength of Nobanion, and these weapons remain dedicated to completing the defeat of that night and wiping out the evil brood of the Black-Blooded Pard.

Camaraderie among the Arcane Brotherhood is an illusion, and each wizard is constantly scheming to overthrow a superior while at the same time fending off his inferiors. This deceptively plain short sword is but one of the many tools created to give its owner an edge in the unending competition.

Greater Gloves of Concentration
+6 Concentration
As age began to creep up on him, Beregost Hamish found it difficult to concentrate while casting challenging spells. The gloves he developed relaxed his mind in even the direst of situations. Before he died, Beregost made a fortune selling replicas of the original gloves to others in his chosen profession.

Boots of Elven scouts
+5 to Move silently
Several pairs of this type of boot were made for elven battalions during the Year of Singing Arrows, 884 DR. The scouts equipped with this stealthy footwear turned the tide of at least two major battles against Sembian mercenaries.

Shar’s Belt of Priestly Might and Warding
+4 Strength, +2 AC, Cast Magic Circle against Good 1/day
Only usable by- Evil
These items first appeared in Halruaa at the end of the Time of Troubles, which the wizards took as a sign that Mystra had returned.
The belt of priestly might and warding grants its wearer protection from attack and increased strength, and further allows them to create a magic circle against alignment once per day.
This particular belt is inscribed with the dark symbol of Shar, goddess of shadow magic.

CLoak of Blackflame
Immunity to Level/Ability drain
This cloak resembles a tangle of thick, black cobwebs when not worn, but smoothes into a woven black cloak of coarse threads when donned. It protects its wearer from energy-draining attacks.

Such cloaks originated in the halls of Sorcere in the city of Menzoberranzan where they are used by drow necromancers to protect themselves from their own creations. This cloak is an adaptation for use in the surface realm.

Shackles of Asenath
+4 AC, +2 Strength, limitation Sorcerer
In her youth, the Thayan slave woman Asenath saw her father killed before her eyes. With the inherited gift of her parents’ magical powers, she slew the lingering attackers who had destroyed the home of her slave mistress, a Red Wizard of Thay. Correctly fearing that a group of Red Wizards would eventually pursue her, Asenath broke the magical bonds that tethered her to the estate and ran into the forbidding mountains of Thay. Though the magical tethers had been broken, the shackles themselves would not break. In fact, they wouldn’t even scratch.

Though Asenath’s war against the Red Wizards of Thay lasted years, the powerful sorceress’ academic understanding of magic never developed much. It was not until after her dramatic death at the foot of Thaymount that wizards learned that Asenath’s shackles had been enchanted by her Red Wizard slave mistress. In fact, the slave mistress had always suspected that Asenath held latent abilities of great potency and intended to use her in a protracted war to wear down the Red Wizards’ School of Conjuration. Though the slave mistress died before she could enact her plan, the conjurers lost hundreds of lives in the process of tracking down Asenath. Through pure luck, the slave mistress’ goal had been achieved and her allies, the School of Abjuration, rose in power.

Amulet of Truth
Constant True Seeing
The engraving on the back of this medallion reads"Deceive not my eyes, for I am Truth."

Cowl of Warding
Immunity to mind effecting spells, freedom of movement.
This headpiece of fine black cloth covers the wearer’s face completely. The wearer of the cowl is protected by a mind blank spell and acts as if wearing a ring of freedom of movement.

Originally designed by clerics of Mask, more recently these cowls have been commissioned from Amnish spellcasters by the local Shadow Thieves.

“With a sharp tongue and a short fuse, Qara has a large fiery personality trapped in a petite body. While her clothes are elegant and sophisticated, her crimson hair is short and disheveled, the result of her constantly running her hands through her hair in moments of emotion. Qara wears her passion visibly; her white cheeks blush red when she’s mad and her hands move with her words when she’s excited. Her large green eyes are often rolling in frustration as rarely a moment goes by when something doesn’t annoy or outright anger her.”

Qara is a depressive, pyromania, and highly manic sorecerer with a very low view of wizards.

Qara is dropout of the Neverwinter Academy of Magic located in the Blacklake District. Being a sorceress, magic comes naturally to her and she does not see the need for studying tomes and brewing potions, but believes that instincts and natural talent is all one needs to excel in the field. She is often criticized by others for showing absolutely no control and restraint for her powers, which usually end up with Qara causing extensive property damage. She looks down on others, particularly wizards like Sand, who need to put in a great amount of time and effort in order to master the art. This attitude of superiority made her rather unpopular within the Academy and she is often the topic of gossips and rumors, to which she tends to overreact, like setting one of the houses on fire or causing physical harm to those spreading the rumors. It has also been mentioned in passing the she is the daughter of the Academy’s headmaster, but this plot was not expanded.
When she left the Academy, she got into a fight with Glina and another wizard from the Academy and damaged the rafter in the Sunken Flagon. Following intervention from the PC, she was forced by Duncan Farlong to work as a waitress in the Flagon to pay for the damage she caused. Shortly after, she was again attacked by other students from the Academy (Ashni and Praven), until they were stopped by Glina’s father, Johcris, who told Qara that she would pay, and pay dearly for threatening his daughter. Jorchis enlisted the help of Sydney Natale, a Host Tower Mage from Luskan, who summoned an Animus Elemental (the darkside of Qara’s powers) that would destroy Qara with her own powers, in exchange for students for the Arcane Brotherhood. The Animus then stalks Qara and attacks her on numerous occasion, however each time they are unable to fully destroy the Animus and Qara grows weaker.

Join: If you agree to cover her tab for destroying the inn, she will travel with you to pay off her debt.

Death: Dies in an explosive fight against a band of enemies wizards. She kills 5 in short notice, however runs out of spells and is murdered by the 6th. 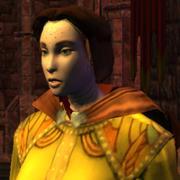