A spoiled princess with a lack tact

Ruto, Princess of the Zoras, is a female Zora introduced in Ocarina of Time. She is the daughter and only child of King Zora, the ruler of the Sea Zora population residing in Hyrule, and serves as the attendant of Lord Jabu-Jabu, the Zoras’ patron deity, in the sense of preparing his meals.3 As a child, Ruto appears to be a tomboy and is shown to be very strong-willed and stubborn even in the face of danger, a trait she would temper and yet benefit from in her adult years when danger once again threatened her people.4 Though she initially shows a selfish streak in her youth,5 she grows to become much more benevolent in her adult years, especially after she is awakened to the knowledge that she is the Sage of Water that guards the Water Temple beneath Lake Hylia.
It is implied that Ruto’s mother passed away some time before the events of Ocarina of Time, though she did give Ruto the Zora’s Sapphire at some point in her youth while telling her that the stone serves as the so-called “Zora’s Engagement Ring” by tradition, and thus instructing her to give it only to the man that would one day become her husband.6 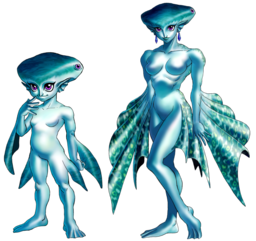