One of Many (Iconic)

A collection of souls who want to consume more.

The One of Many may join your party if you devour Okku at the end of Act I. In the furnace in the Death God’s Vault, you can devour the priest who serves as the “One” for the many. Using Okku’s husk, you can force the thousands of souls into the husk, and thus, you have it in your party.
It starts out as “Child”, a rogue, but as you build influence, it can turn into the “Brute” which is a barbarian. Further, if it devours the Sleeper, it can also turn into a warlock.

If you end the curse, but have a positive influence with One of Many, it will remain with you. If you are of the good alignment, you will force it to destroy itself. If you have negative influence, it will leave you, threatening you.

If you take Akachi’s soul as your own, it will laugh, call you a fool, and run away back to the Prime.

If you slay Akachi, it will question your decision not to take power for yourself, but will follow you still

If you devour Akachi, it will be enthralled with your choice, saying that it is your loyal servent, now and forever.

Death: Dies fighting against a Bonelord.

One of Many (Iconic) 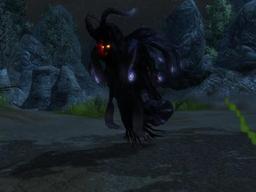