Oloch has no memory of a time before pain—pain suffered, and pain inflicted. A half-orc of the Haskodar tribe in Blisterwell, Oloch was raised—if it can truly be called that—with the knowledge that his parents had been quarry slaves who died in the ancient mine’s cramped tunnels shortly after his birth. Constantly forced to fight for survival against his larger, stronger tribe-mates, Oloch quickly learned that the best defense is a total lack of fear or restraint. Those who thought to casually bully the child soon learned the error of their ways, for in Oloch’s mind, every fight is a fight to the death, and anyone who pretends otherwise leaves themselves vulnerable.
This fearless ferocity did not go unnoticed. As Oloch reached his teenage years, the tribe’s leaders began harnessing the boy’s abilities. Whether in the gladiatorial pits or in battle against the sometimes-allied One Eye tribe, Oloch shed blood on command—both his own and that of others. As his victories mounted, the tribe’s priests of Gorum took control of Oloch’s education, wrapping him in armor and teaching him the glories of the Lord in Iron. In Gorum, Oloch finally found someone he could look up to: a being of perfect strength, without the pathetic fallibilities of even the other battle-priests. More, Gorum looked into Oloch’s heart and put to rest any nagging doubts the half-orc had about his love of violence. He saw the dark thrill Oloch felt as his oversized sword split the spine of an enemy—and rewarded it with magic.
As time went on, Oloch began to chafe at even the meager restrictions placed on him by his orc superiors. Who were they to tell him when and where to fight? And so perhaps it was inevitable that, upon learning the truth of his heritage—that he was no slave child, but rather the stolen son of a human adventurer—he took the chance to sever ties (and limbs) and strike out on his own, taking with him only his favored gear and a description of the fearsome warrior woman who bore him.
Fortunately for Oloch, the legend of a woman brave enough to adventure alone in the Hold of Belkzen—and rumored to tryst unashamedly with orcs—is a hard one to stifle. So it was that he soon found himself standing before the gates of the human settlement of Trunau, calling for its leader, Halgra of the Blackened Blades, to stand forth and meet her son.
To his surprise, she did, and Oloch found himself both shocked and vaguely discomfited by the warmth with which Halgra greeted her lost son, welcoming him into her house. There she told him the story of his birth—how he was the product of a short-lived dalliance with a powerful orc leader she refused to name, and how he had been stolen from her as an infant during a raid on her campsite. She introduced him to his half-siblings, and offered him a place as a defender of Trunau.
Yet a wolf can never be a simple dog, no matter how much it might long to wear the chain. To Halgra’s horror, Oloch’s lust for battle refused to be sated by simple raids and training bouts. Citizens who roused his ire were terribly injured, and in the end Halgra herself had to take up her sword and drive him from the town, announcing that she would always love him as a son—but that he would never again be allowed in Trunau until he learned to control his battle lust and turn his divine abilities toward a positive end.
Frustrated, feeling shamed for the first time in his life, Oloch left Trunau. For a time he wandered the wilds, yet no ordinary beasts could provide a proper challenge—nor remove the lingering suspicion that there might, as Halgra claimed, be more to life than simple bloodshed. Eventually he wound up in Urgir, where he quickly found work as a government enforcer and champion. Though on the surface, he claims that his position ensures him a steady supply of worthy opponents, in secret Oloch hopes that Grask Uldeth’s half-civilized ways will help him puzzle out how to balance the orc and human inside himself and discover the man he was born to be.
Oloch is a quiet, brooding warrior with a disturbing love of violence. Though not actively evil, and scornful of those who pick on obviously weaker opponents, he nevertheless takes it as a given that might makes right, and the whining of those unable to defend their property means little to him. He lives in the moment, relishing the red rush of battle and the communion it brings him with his god. He’s not opposed to working with—or even for—those he considers his equals, but those individuals are few and far between, and must take pains to show him proper respect. Perhaps the only activity other than combat that truly brings him pleasure is making music on his drum—and then only if it’s sufficiently riotous as to echo the clamor of battle 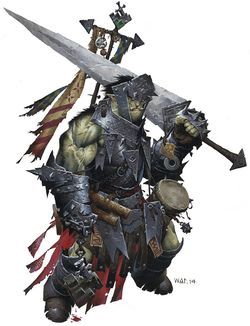