“Casting wild magic is like playing a flute by ear. In magical terms, I can play a pretty mean tune, but when I miss a note the flute shoots fire at everyone.”

After a disastrous wild surge maimed her fellow students, Neera fled her home to wander the High Forest. Even there, her capricious spells threatened the highly flammable woods, forcing the mighty treant Turlang to banish Neera from his domain. On the open road, Neera enjoyed only fleeting companionship before the Red Wizards caught up with her.

Neera’s whimsical humor clashes with the guilt she still harbors over the harm she has inadvertently caused in past. She hopes to find a way to control her wild magic, even as she delights in the surprises that could come with every spell.

Fleeing the Red Wizards and seeking a better understanding of her own powers, Neera hopes for friends who can help her survive both her hunters and her own magic.

Death: Dies in a horrific explosion that destroyed herself, one a large section of the second wall, and killed a band of transmuters 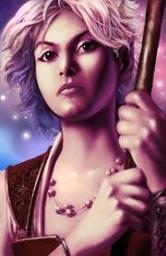