what do i know.

A zealous and fanatical champion of good society, Najara hopes to cleanse the world of all evil and has a total lack of empathy for evil doers. With her band of followers (10 Guards level 5, 6 Guards level 7, 1 Guard level 10) she wanders the wildlands killing bandits, slavers and warlords, not to mention protecting the locals from monsters. Her band though small is well trained and are all ex evil doers themselves, and thus know the local area and activities quite well. This and the fact that the group is extremely well equipped means that they are a far more powerful force than most would imagine. Multiple times enemy groups have banded together to try to wipe her out, but the local populace and her groups knowledge of the terrain have kept her alive despite suffering losses for her forces. As she refused to work with any remotely evil faction, she is constantly on the run but is making a great difference in her area, despite her ruthlessness. She has set up more than a few hospitals and schools in the Wilderlands, but most are destroyed a few years after her group leaves, as she refuses to be tied down.

Relationship: Najara has an extremely hostile relationship with Xena. Najara respects and admires Xena, seeing her as an ally in her struggle against evil, but Xena sees Najara as a violent fanatic and destroyed her last band. Najara will never undermine Xena if she is fighting against evil, but is perfectly willing to kill Xena if she believes she is fighting on the side of evil. Najara believes that Gabby is misguided and will never try to harm her except in self defense.

Death: After losing her army at the palisade, she dies fighting against a Bull Demon. 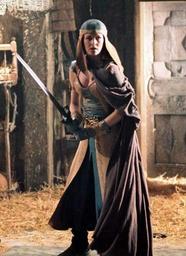