In Baldur’s Gate, Montaron can be found along with Xzar on the road near the place where Gorion was killed. He’s a member of the Zhentarim dispatched along with Xzar to find out who’s to blame for the iron crisis, since their organization actually has nothing to do with it in spite of rumors to the contrary. He hates working with Xzar and generally seems to think that the best thing that could be done with everyone besides himself would be to kill them, something which he openly enjoys. He and his counterpart get along particularly badly with the two Harpers Khalid and Jaheira, with whom they may eventually come to blows.

Personal Quest: And old hafling rival comes to kill him

Death: Dies fighting a band of gibberlings, after ironically suriving the major battle by faking dead 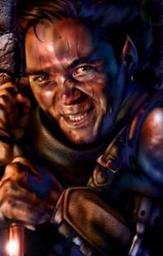