Forged under an auspicious comet, this staff was originally a gift for the Water Spirit of the Silkworm River. A young prince named Seng Lo sought to win the heart of the Water Spirit and had the staff created as a gift. He then convinced the Great Eastern Serpent to fly him to the heavens, where he dipped the staff in the golden comet. The light of the comet dimmed, but the staff became more powerful than any before it. To this day, no one knows if Seng Lo won the Water Spirit’s heart, but there is no questioning the magnificence of the staff he created.
Essence Gems

Gem of Gentle Mind
Intuition +2, Mind +2
This gem radiates peace and serenity, reflecting the past owners, who imprinted fragments of their own thoughts on it. This is a gem of enlightened scholars and philosophers, men and woman at peace with themselves and their place in the world. Their tranquility and peace of mind is passed on to those capable of tapping into the gem’s power.

Greater Monk’s Gem of Fate
Double Chance of Chi power ups, -5 Insight
One who is content with water every day may never enjoy the taste of wine. Not every master finds wisdom in caution, and those willing to compromise their spiritual abilities with this gem often find Chi power-ups." 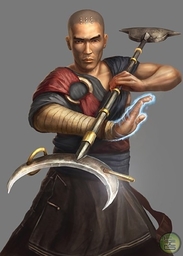