From the fine tailoring of his immaculate suit to the gold handle of his elegant sword cane, little about Meligaster’s current appearance belies his upbringing as a common slave. Born in captivity in the field house of a minor noble Lord Maskelyne in the devil-obsessed nation of Cheliax, Meligaster’s childhood saw him cast in the role of enforced plaything to a brood of aristocratic children. Even as his own brothers and sisters were torn away and forced into servitude at noble estates all over Cheliax, Meligaster found a new home as an adopted sibling of his master’s children, who treated him like a beloved living doll. While his aging mother toiled in the manor’s laundry, Meligaster sat at tea in gardens blooming with a profusion of exotic and colorful plants. The children dressed their “poppet,” as they called him, in stylish suits of silk and velvet, granting Meligaster an early appreciation for the finery of nobility so foreign to his true brothers and sisters, whom he began to forget as the years went on.

The young halfling soon found that he possessed a natural charm and wit that engendered an especial affection in his “hosts,” and even the elder generation of Maskelynes doted on him and offered him special privileges. At night, when the children went to bed and Meligaster returned to the “Sliphouse,” a ramshackle garrison for the family’s halfling servants, he regaled his fellow laborers with news of the goings on in the manor home. He wove vivid tales of rooms festooned with fine framed paintings, of beautiful bronze baroques depicting the gods of Old Azlant, and chambers lined with bookshelves holding the accumulated knowledge of centuries. At first, Meligaster’s fellow slaves resented him for the better treatment afforded by the nobles of the house, but here again the halfling discovered that his charm, humor, and personal charisma were enough to get even the most hostile audiences on his side.

Despite the nice clothes and decadent meals, Meligaster remained a slave. He was forbidden from leaving the estate grounds alone, and on the rare occasion when he accompanied the children into town he did so with a fine silver chain around his neck. As the children grew older, tea parties evolved into wrestling and rough play, and the small stature that had so endeared him in years past became a liability. Now teenagers, the children began to view Meligaster as an old, unwanted toy. No longer did he receive a handsome new suit every fortnight. No longer was he welcome to sip sumptuous wine at the feasting table. To his considerable consternation, Meligaster began to take on a shabby appearance, and his change in status—subtle at first—undermined his cheer and good humor, which in turn served to further alienate him from his hosts.

At the same time, Lord Maskelyne’s political affairs in the nearby capital city of Egorian grew dire, and the family found its fortune much diminished. Things at the manor became much harder not just for Meligaster, but for all of the slaves and servants of the Sliphouse. As the fortunes of his fellow slaves grew worse, their attitudes toward him grew likewise darker and less charitable. Meligaster, formerly a friend to slave and master alike, soon found himself with no allies in an environment that grew more and more dangerous as the Maskelyne’s fortunes continued to decline.

On one particularly dreary day, while sitting at the bedside of his ailing mother, Meligaster found himself surrounded by a half-dozen halflings with scowls cut deep into their faces. Each held a field implement in tense hands, and Meligaster knew from a single glance that they had not come to wish the woman well. The Maskelyne children, Meligaster’s estranged playmates, had just that morning burned three particularly troublesome slips upon a pyre as a sacrifice to Mammon in hopes that the archdevil would reverse their family’s fortunes, and the bedside visitors clearly meant to even the score by harming Meligaster. When his amicable pleas did nothing to curb the slaves’ threats, Meligaster looked deep into their eyes and funneled all of his charm and personal magnetism into that glance. His striking eyes had always managed to get him out of trouble in the past, and with great effort encouraged by desperation and fear for his mother’s life, Meligaster ordered the interlopers to return to the fields and leave him alone. To his surprise, the slaves quickly agreed, changing demeanor almost immediately. Minutes later he stood alone in his mother’s squalid chamber wondering just what had happened.

In the weeks that followed, Meligaster continued to explore this new power of persuasion. When he could not find a fellow slave on which to experiment, he looked into the rheumy eyes of his mother, whom he found to be most pliable to his commands. At the same time, Meligaster stole books on healing techniques from the Maskelyne libraries, and experimented with touch treatments designed to nurse his mother back to health. While he managed a few minor successes along these lines, he could see the kind, broken woman fading with each day. Eventually her eyes filled with cataracts and her mind grew weaker and weaker. At first, Meligaster took advantage of her failing defenses to strengthen his influence over her, commanding her to get healthier, but the woman eventually grew insensible. Soon he turned his experimental attention fully to the other halfling slaves of the Maskelyne estate, who were little match for his bolstered mental powers.

First, he used his fantastic stare to bind the bully-boys who had threatened him earlier into service as personal protectors. On his increasingly rare visits to the manor he surrounded himself with a coterie of tough protectors. When this drew the ire of taskmasters who naturally expected Meligaster’s defenders to attend to their assigned duties, Meligaster likewise brought them under his influence. Soon he had coerced the psychic allegiance of all of the Maskelyne’s slaves and overseers, who doted upon Meligaster and began treating him better than they treated their lawful masters.

Meligaster tired of the Sliphouse. It was time to make his move on the manor. By this point he had developed his mental powers to include the ability to cast psychic spells, which he used to great effect. First he bent his former playmates to his will, then the lord and lady of the house as well. Meligaster took up residence in a resplendent chamber within the home, sharing his room with his ailing mother and forcing the nobles to serve him as he and his mother had served them. Manipulating Lord Maskelyne into granting him generous gifts from the family’s dwindling fortune, Meligaster once more dressed in the finery to which he had become accustomed. He ordered the most celebrated craftsmen of Egorian to cut him a beautiful white suit and matching fez, accentuating his style with a locket medallion containing an ivory cameo of the only individual other than his mother than he had ever truly loved—himself.

For months Meligaster lived as the master of the house. When his charges—particularly among the Maskelynes—failed him, he responded with the pent-up cruelties of 20 years, subjecting them to the same whippings and tortures they had inflicted upon him. In time he grew used to being obeyed, and his perverse punishments extended to his fellow halflings, whom he began to think of as his own personal chattel. What once had been a playful sense of humor transmogrified into a cynical cruelty. When he grew tired of disciplining his inferiors, he manipulated their minds to make them the agents of their own humiliation and injury, and as he grew more comfortable in the seat of power, Meligaster began to enjoy these punishments. He soon became a harsher taskmaster than the Maskelynes had ever been, and while all residents of the manor claimed to love and adore him, not a one did so of his own free will.

Meligaster went to great lengths to conceal his reversal of fortune from the other nobles of the Egorian outlands. He received no visitors and closed the estate to the outside world. It came as a surprise, then, when he found himself in the company of a freed halfling slave named Lem, a charming bard who claimed to be an escaped slave born to the same mother. After decades apart, Meligaster looked into the eyes of his long-lost sibling, and what he saw broke his heart. Lem represented another way out of the grim subsistence of slavery. His brother was just as charming and charismatic as he, but even though Meligaster lived as a lord in his secluded manor, it was Lem who seemed at peace with himself. Worse, Lem was horrified by the scene of vacant-eyed halflings and humans that greeted him at the Maskelyne estate. He pleaded with Meligaster to abandon his ruse and run away with him to Absalom, but Meligaster would have none of it. In the presence of their failing, bed-ridden mother, the two brothers argued about the bonds of family. Meligaster summoned all of his psychic power and, gazing into the eyes of his brother, he commanded his visitor to abandon the Maskelyne estate and never return.

The following morning, Meligaster learned a powerful lesson about the limits of his power. He awoke to find Lem gone as he expected, but he also found that his brother had absconded with his frail mother, and that he had unshackled all of the halfling slaves as well, somehow using his magic-infused music to break Meligaster’s hold upon him. Angered at months of mistreatment at Meligaster’s hands, the slaves set the manor house ablaze, bringing a squad of Hellknights and neighboring lords to investigate the reclusive Maskelynes. Meligaster was forced to flee with little but the clothes on his back and a sack full of some of the Maskelyne’s greatest treasures.

In the year since, Meligaster has bounced from city to city, taking on short-lived jobs as a spiritual advisor to various nobles, whom he bilks of their wealth before moving on to another “sponsor” in a distant realm. Agents of Lord Maskelyne hound him at every stop, keeping the halfling constantly on the move and leery of laying down strong ties to any one location. Years of relying upon mental manipulation to get his way have considerably damaged his psyche, and while a part of him regrets the cruelties necessary to maintain the lifestyle he feels he deserves, he is loath to take a backward step, and seeks always the easier route to wealth and the finer comforts of success. After leaving behind him a trail of powerful enemies, Meligaster has, of late, turned to a life of adventure, finding it safer to pilfer from the tombs of dead lords and ladies than the drawing rooms and bedchambers of the living. He has never again seen Lem, and plots one day, when he is ready, to venture to Absalom and show his brother the folly of underestimating one who has total control over the minds of others.2 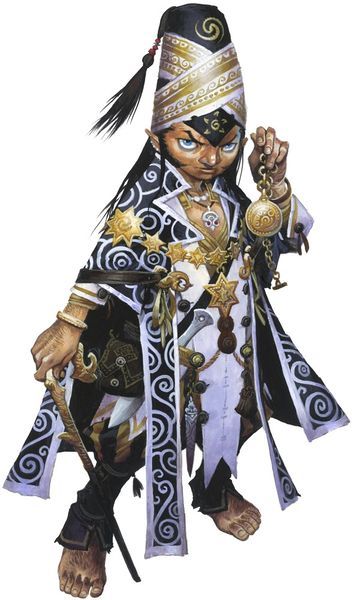