When asked about her past, Mazzy proudly states that she has spent numerous years adventuring around Amn with her other halfling comrades, basing out of her home town of Trademeet. The thought of Patrick and her other companions and their fates brings a shadow across her face, however. Mazzy is a dedicated servant of Arvoreen, the halfling god of war, and she resents the common perception by the bigger races that the stout folk cannot defend themselves or act with valor. If she could, Mazzy would be a paladin and battle against evil in Faerun with the full power of her god to aid her.

How To Acquire: After killing the Shadow Jailer on the first level of the Shade Lord’s dungeon, you’ll find a key to Mazzy’s cell. Release her and she’ll join up.

Romance: She will romance any hafling, gnome, or dwarf male who is good and has Charisma of at least 14.

NPC Quests: Mazzy’s Sister Gets Poisoned – some time after you join up with Mazzy, her sister’s boyfriend seeks her out to tell her he has poisoned Mazzy’s sister. You have to travel to Trademeet to resolve this issue.

Mazzy and the Ogre – the first time you enter the Slums District with Mazzy, an ogre named Gorf the Squisher will be bullying people outside the Copper Coronet. Mazzy of course challenges him to a one-on-one duel…

Death: She dies fighting against an Abyssal Giant, after slaughtering her way through its Ogre minions 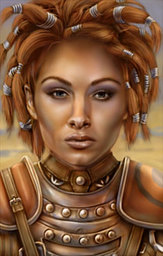