A super mutant that has joined up with some humans

After the Master’s defeat, Marcus wandered aimlessly, looking for fellow super mutants. In the year 2185, at high noon, he encountered a Brotherhood of Steel Paladin in power armor named Jacob, who had pledged himself to the extermination of all mutants. They fought for days with guns and fists, but eventually gave up, each unable to get an advantage over the other. Eventually, they realized the pointlessness of their fight, and broke down in joined laughter, beginning a strong friendship between them. The two started traveling together, arguing over the Unity and Brotherhood doctrine and whether or not the Master could truly neurolink his biology into the Cathedral computer network. As they wandered through the wastes, they attracted a following of other refugees from the war, who believed that Marcus’s strength and Jacob’s power armor gave them the closest thing available to safety. In Fall of the same year, Marcus and Jacob, along with the trail of ghouls, humans, and super mutants, founded the community of Broken Hills.
After the Chosen One helped him expose an anti-mutant conspiracy in Broken Hills, Marcus joined him on his quest to find the Garden of Eden Creation Kit, and eventually to save the people of Arroyo from the Enclave. When the group’s task was complete, Marcus returned to Broken Hills and watched over the town until the uranium mine ran dry and the place, no longer having an economic foundation, was deserted by its inhabitants.

As his position as sheriff of Broken Hills had outlived itself, Marcus, inspired by the example set by the Chosen One, started wandering east, across the great mountains, in search of other super mutants. He never found out what happened to his tribal friend from Arroyo, but he had a feeling that he did good in the end.

Marcus eventually reached the Mojave Wasteland, where he founded a community for super mutants atop Black Mountain. This fell apart when Tabitha, an insane nightkin, rallied the less intelligent Enclave-created mutants against Marcus and forced him and his supporters out of the area. By 2281, Marcus had found Mount Charleston, where he founded yet another safe haven for mutants, naming it Jacobstown in honor of his old friend. At Jacobstown Marcus helps and protects schizophrenic nightkin, and hopes to find a cure with the help of former Enclave scientist Doctor Henry. Marcus will also greet the Courier and warn him about the nightkin within Jacobstown when the Courier enters Jacobstown for the first time.

Death: Dies fighting against a team of Endless Walkers 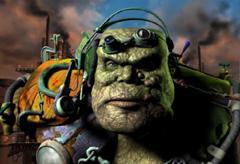