A young man who has been impressing his teachers for ages.

Spirit Harvest
More XP but no power ups from ghost
Those who hunt ghosts and wayward spirits often find that the knowledge gained from defeating ephemeral foes is more useful than the recuperative pockets of essence that they leave behind."

Lucky Hand
+1 to all search checks to find money
When properly prepared, this gem plucks the silken strands of fate, gently placing small amounts of local currency in the pockets of the people within a certain distance of the wielder. Used in more innocent times to subtly bolster the wealth of the poor, these gems have fallen into misuse, and pickpockets now use it to pad the pouches of those from whom they steal."

Heaven’s Blessing Gem
Any non Open Palm attacker takes 1D10 wind damage if they make a melee attack
“This gem surrounds you in an aura of wind that damages any who attack you. Its effect is constant while the gem is equipped.” 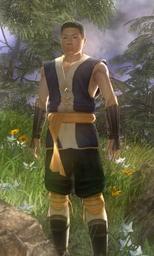