n her many explorations and journeys, Lini (pronounced LEE-nee)1 encountered numerous large animal predators, with whom she seemed to possess a certain affinity. More than once, Lini’s traveling companions or enclave came under threat from some great bear or razor-clawed cat, but with a series of soothing noises and precise motions Lini always tamed the beast and sent it on its way.
Lini’s success at calming animals came to an end one day when a snow leopard bound out of the trees and pinned her to the ground before she could react. Her friends scattered, leaving Lini alone to face the beast. Although fascinated by the cat’s power and speed, and appreciative of its beauty, Lini trembled under its massive paw and tears leaked from her eyes. She knew she faced her doom, and she found it cruelly ironic how death came to claim her.
Yet the leopard did not strike.
“Your friends have abandoned you,” a calm feminine voice intoned out of Lini’s sight. “Despite the times you saved them, they left you to die.” Although Lini could not see the woman, Lini knew of the Norn of the forest and suspected she was one of them.
“Please help me,” Lini whispered, her chest struggling to rise under the great cat’s crushing paw.
“You do not need my help, little one. You need hers.”
Lini looked at the snow leopard, deep into its eyes. She saw neither hunger or malice. Still struggling just to breathe, Lini stared into the great cat’s eyes and asked, “Will you help me?”
Inexplicably, the snow leopard lifted its paw from Lini’s chest. A coughing fit then overcame the small gnome, and when she finally recovered she looked around her. The snow leopard was gone and Lini saw no sign of the Norn. She looked around frantically, suddenly alone and scared. A small gnome in a large world.
“Come back,” Lini cried. “Don’t go! Please don’t go. Don’t leave me alone.” She sank to her knees, tears afresh on her face, until she heard the sound of approaching footsteps.
The snow leopard had returned. With the delicateness of a mother tending to her cubs, the great cat licked gently at Lini’s face, whisking away her tears. Lini threw her arms around the leopard’s neck. “You are my friend, aren’t you? I will call you Droogami. That is what we call good friends.”
Lini looked down then and picked up a stick from the forest floor before clambering up the cat’s side to perch on its back.
“Let us go, then, Droogami. We have no need for this place.”
In the years since her departure from the Lands of the Linnorm Kings, Lini has collected more than a dozen sticks—one from each forest or wood she visits. In her resting time after long days of travel, she sits at Droogami’s side and peels the bark from the sticks, smoothing and polishing them incessantly. 2

Lini always had a way with wild creatures. More than once, her enclave was threatened by some great bear or razor-clawed cat, yet each time she soothed the beast and sent it on its way. In the years since her departure from the Lands of the Linnorm Kings, Lini has collected more than a dozen sticks—one from each forest she has visited. These sticks are a roadmap of her experiences, and each holds a wealth of memories for the gnome druid.

Death: Dies fighting against a Forest Demon, after decimating its Giant band 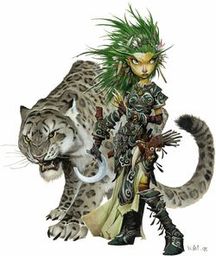