A dwarf mercenary with Gold Fever

When asked about his past, Kagain stresses that the questioner should just mind their own business if they want to keep their teeth. It is apparent that he runs a rather shady mercenary company and that he is quite obsessed with wealth, but any information beyond this he is content to keep to himself. In Baldur’s Gate, Gorion’s Ward could have encountered Kagain in his (difficult to find) place of business in Beregost. If found, Kagain would have wanted to hire the player’s party to find some lost caravans and would have joined them to do so if this was agreed upon. Like many members of the Ward’s party, Kagain may have grown dissatisfied and bored with the whole deal, and decided that he’d be willing to go along in doing whatever Gorion’s Ward was otherwise doing, possibly in the hopes that it would have proven more lucrative.

Personal Quest: He is hired to protect a caravan, but when they arrive, it has already been destroyed. Feeling guilty, he chooses to go after the bandits, after defeating them he found that he could not in good consciousness keep the gold for himself. He instead chose to have it given away to charity.

Death: He dies fighting against a whole band of Night Giants, and he is able to kill them all before finally dying. 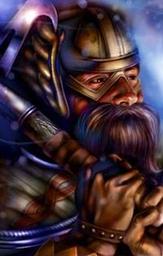