An ex raider, but still a dick.

Jericho was born in 2212. He was once a dangerous raider out in the Capital Wasteland, who killed and stole for measly amounts of caps and loot. After fighting with the raiders for many years, and becoming a crack shot with a rifle, Jericho settled down in Megaton to enjoy his twilight years. But he didn’t lose his raider ways. The smarmy, rude Jericho helps protect the town, but still gets drunk and curses at passersby. He’s thought about getting back out into the wastes to fight again, but not without some caps for “equipment”. Jericho occasionally does some odd jobs for Colin Moriarty.1
Reading Moriarty’s terminal suggests that Jericho may have once attempted to rape Jenny Stahl. You cannot bring this up in conversation. Occasionally if you find Jericho at the Brass Lantern you can hear him and Jenny Stahl have a conversation that can relate back to this.
Jericho can be recruited as a follower, but you must have evil Karma for him to join your party. When asked to join the player’s party, he requests 1000 caps for “supplies” before he will join. He will not quit if your Karma improves and can be rehired free of charge.
You can persuade Jericho to tell you a secret for 20 bottle caps. He tells you that Colin Moriarty keeps a key around his neck, which unlocks the upstairs locker in Moriarty’s Saloon. Inside are all the caps Gob and Nova make, as well as a combat shotgun. However, the key was cut, and the locker can only be lockpicked. It has a Hard level lock.
Jericho can be saved from the destruction of Megaton by being hired beforehand and taking him to a safe zone outside of Megaton.
Effects of player’s actionsEdit
If you kill all of Megaton with him as your follower he will not become hostile towards you. However, if you kill the brahmin outside the clinic, or steal from his house, and then fire him anytime after that, he will become hostile.
If you decide to blow up Megaton during the quest The Power of the Atom while he is your companion (and will therefore not die in the explosion), and fire him afterwards, he will walk to the Megaton ruins and stay in front of the crater. He will mention the destruction of Megaton when you talk to him, but won’t feel sorry for its residents. You can still hire him as your companion.
Inventory

Death: Dies fighting against a band of Mirelurks 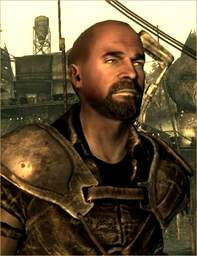