An adrenaline junkie who wants to try to good

Cortez is the only child in his family and lost both of his parents years ago. He had a husband named Robert who was stationed at Ferris Fields in 2185, but the Collectors abducted the whole colony and Robert did not escape. While the Collectors were attacking, Robert called Steve, who was working on construction at a remote station not far from the colony, warning him to escape before the Collectors hit his station too. Steve begged Robert to escape with him, but Robert knew it was too late and asked Steve not to come after him, but to let him go and move on. Steve grieves heavily for his husband’s death, and kept a recording of their last call.
Steeeve – robert recordingHe has been in the Alliance since around 2176, first serving in the First Fleet on-board the SSV Hawking piloting F-61 Tridents. According to him, he has a knack for procurements, but his skill set made him a more valuable person to command a flight deck.
Five months prior to the Reapers’ invasion of Earth, Cortez was assigned to the Normandy SR-2 retrofit team, responsible for overseeing cargo bay modifications. His immediate task was to shift the Normandy’s armory from its previous location behind the CIC to the shuttle bay.
Besides being a Kodiak pilot aboard the Normandy SR-2, he is also responsible for maintaining the Normandy’s armory, a duty he shares with Lt. James Vega. Cortez and Vega are friends, having served together before. In between missions, they engage in off duty conversations.

Cortez prefers to have as little time off from his duties as possible, since any time spent not working gives him too much time to think about Robert. Shepard has the option of convincing Cortez to take time off to leave the ship and succeeds. At first, Steve just loiters near the Normandy’s docking bay on the Citadel, but he finds Shepard’s suggestion a good idea since the vista of so many ships in flight brings him comfort and gets him thinking. He later visits the Memorial Wall for victims of Collector and Reaper attacks at the refugee docks, where Shepard can once more offer words of support.

Steeeve in citadel memorial wallThe downtime helps him to move on, and he meets up with some old pilot friends and forwards their information to Admiral Hackett, giving the Alliance some much needed pilots. A further encounter at Purgatory allows a male Shepard to begin a relationship with him, or reinforces their friendship otherwise.
During the final assault on Earth, after dropping off Shepard’s squad, Cortez’s shuttle is shot down by a Harvester. If he has been persuaded to visit the Memorial Wall, he survives the crash and can be contacted via hologram later.
Steve is later present in front of the Normandy’s memorial wall with the rest of Shepard’s surviving crew if the Crucible was activated, paying his respects to the dead.

If Steve was never interacted with much, he dies when his shuttle gets shot during the final assault on Earth. He cannot be contacted and James confirms Cortez’s death. Much later, if Shepard uses the Crucible, Steve’s name is listed in the Normandy’s Memorial Wall as Steven Cortez.

Mass Effect 3: Leviathan Edit
During the mission to find Leviathan, the shuttle’s systems stop working after it is hit by an energy pulse by Leviathan, forcing Cortez to make a crash landing on one of the shipwrecks. Eventually, Reapers start attacking them and Cortez comes up with a plan for Shepard to reach Leviathan at the bottom of the ocean. He suggests activating a Triton ADS, which Shepard can use to venture underwater. Cortez then provides Shepard with power cells from the shuttle to power up the doors and access the mech.
When Shepard wakes up in the shuttle after meeting the Leviathans, and Shepard’s love interest is not in the squad, Cortez will say, “We’re lucky we got you back”. If he is Shepard’s love interest, he will instead scold Shepard, “Never do that again”. Back on the Normandy, he tells a romanced Shepard that he wishes he could have gone with him.

Mass Effect 3: Citadel Edit
After Shepard escapes from CAT6, Cortez can be found in the study room of the apartment. If Shepard romanced Cortez, he will jokingly admonish about Shepard going out for dinner with Joker, saying, “Let that be a lesson, you sneak off to a dinner date with another man, you get shot at.”
Cortez will provide assistance during the infiltration into the Spectre Archives as part of Team Hammerhead, and will provide suppressive fire with a M-8 Avenger-like assault rifle alongside the rest of the crew.

After taking back the Normandy from the Clone, Cortez will send Shepard an invitation to the Silversun Strip. Steve picks Shepard up at the appointed location with the Kodiak to go on a joyride. If Shepard and Cortez are involved in a romance, Shepard can choose to hold hands and then cuddle in the back of the Kodiak while it flies on autopilot.

At an energetic party, Cortez (supported by Garrus, Javik, and Wrex) and Joker can be found arguing about Joker’s lack of gun training. Cortez insists on taking Joker to the shooting range while Joker insists that he doesn’t need to because of EDI. Shepard can either support Joker or Cortez. If Shepard supports Cortez, Joker will agree to go to a gun range to practice, conditional on Cortez beating him in a drinking match. However, Joker’s alcoholic concoction (a combination of horsechoker and mouthwash) lead Cortez to surrender. If Shepard supports Joker, the argument ends.

Cortez can also be invited up to Shepard’s apartment, along with James Vega, before or after the party. He will send an e-mail asking for an invitation, if Shepard has helped him reach a sense of closure about his husband’s death. He will wish to watch the biotiball game featuring the Seattle Sorcerers taking on the Usaru Maestros.

Both Cortez and Vega will state their cases for each team to win. Shepard will be asked to back a team. Selecting a particular team will result in the supporter of that team winning the bet (though the Sorcerers always win the game). When Shepard questions this, the winner reveals that the bet was only on whether the Commander would be correct in their pick, rather than who would actually win. After the game, both of them thank Shepard and leave the apartment. If Cortez is romanced, James will tell them to enjoy their evening and leave the two of them to cuddle on the couch.

Romance Edit
“Not one moment for granted.”
Steeeve – citadel downtime 1During one of the mission downtimes, Shepard catches Cortez in the Normandy’s shuttle bay mourning Robert, his husband, who was taken by the Collectors. Shepard can comfort Steve by telling him that he’s always there for him. Later, Shepard persuades Steve to take shore leave as a favor to the Commander. Cortez accepts the offer, replying that he finds it hard to say “no” to Shepard.
Steve can be seen on the Normandy’s Docking Bay on the Citadel during one of the trips there, taking Shepard’s suggestion. Cortez once more doubts the circumstance of his survival, musing it it may have been better to go down fighting with loved ones, though Shepard steers him away from his dark thoughts by pointing out they’d have never met if Steve died. Steve then talks about the Memorial Wall put up by refugees, and considers going there to move on.
Later, he is seen at the Memorial Wall saying goodbye to his late husband. Shepard comforts him, commenting that Steve’s past was his and that nobody could take that away. Cortez then thanks Shepard for his encouragement.

Steeeve and shepard romance lock-inEventually, Cortez will be in the Purgatory Bar. Shepard notes that Steve looks happier and Cortez replies that Shepard was right about the past being his, and that no moment should be taken for granted. When the Commander expresses doubt that a nightclub is to Cortez’s taste, Steve explains that there was an energy and life in dancing, suggesting that the eye candy isn’t too shabby for him either. Shepard wonders why Cortez isn’t looking at him, though Cortez admits his interest and invites him to dance.
While Cortez and Shepard dance, the Commander tells Cortez about his feelings, wanting to be more than friends. In reply, Cortez thought he felt there was something between them but was merely pessimistic about it. Shepard affirms that feeling and kisses Cortez.
Steeeve – mann gegen mannBefore the assault on the Cerberus Headquarters, Cortez visits Shepard to update him on the status of the armory and shuttle. He also tells Shepard he hopes he wants some company before the call is made to launch the assault. If Shepard accepts, the two kiss and spend the night together. Shepard can’t sleep, anticipating the immense casualties of the assault and overwhelmed at the responsibility of the mission. Cortez comforts him, saying it was Shepard who managed to unite the whole galaxy.
Before the final battle on Earth, Shepard can contact a romanced Cortez via hologram after his shuttle crash. Glad he is unhurt, Shepard tells Cortez seeing the shuttle explode was a “feeling I never want to have again.” Cortez admits it wasn’t one of his finer moments as a shuttle pilot. He tells the Commander with him around, “the impossible doesn’t seem that tough,” and will be waiting for him after the war.
Steve will be the one to place Commander Shepard’s name in the Normandy’s memorial wall much later if the Crucible was activated. If the Reapers were destroyed, he refrains from doing so, although otherwise he proceeds and grieves along with the rest of the crew who survived. If organic-synthetic synthesis was achieved, he hugs EDI at the very end. 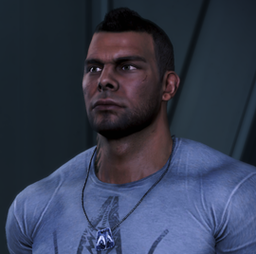