Once in a millennium, a man or woman is born who expands the frontiers of what Force users can achieve. Proud, young Jedi Padawan Jaesa Willsaam discovered the unprecedented ability to discern any being’s true nature and uncover a person’s most secret intentions. Born to a family of servants on Alderaan, she was brought to the Jedi Order and trained by Master Nomen Karr. But Nomen Karr could only protect and shield his Padawan from the world for so long. Through the machinations of Darth Baras, Jaesa was drawn away from the protection of the order and confronted by Baras’s own apprentice–and with the emotional instability of her Master.
Dark Side
Having finally witnessed the Jedi Order’s weakness and the dark side’s true power, Jaesa embraces the Sith path with reckless abandon. She now knows that the only truth-inducing force in the galaxy is fear.
Light Side
Having now seen the darkness within the Jedi Order, Jaesa has left its corruption behind completely to help transform the Empire from within. She has searched her whole life for something to believe in, and her new teacher has provided the answer."

Born on the idyllic planet of Alderaan to servants of House Organa, Jaesa Willsaam was raised in a life of relative privilege. Though she was not a member of Alderaanian nobility, her family’s position within one of the more esteemed Houses allowed her the opportunity to intermingle with the social elite. As she got older, Jaesa discovered that she possessed a gift; she could see the true nature of anyone, and learn of their true intentions. When Jaesa was chosen to be the personal handmaiden to an ambitious, yet deceitful aristocrat, she discovered the lies and hypocrisy that tainted Alderaan politics.
Disgusted with the deception, Jaesa grew tired of Alderaan politics and began to question her future. Around this time she also met the Jedi Master Nomen Karr. Master Karr sensed in Jaesa a strong connection to the Force, and believed that with the proper training and tutelage, she could become a powerful Jedi. When he offered to take her under his guidance and train her in the ways of the Jedi, Jaesa leapt at the opportunity to see the galaxy and put her faith in something that represented everything Alderaan’s high society was not.

Jaesa holds to the ideals of the Jedi with complete conviction, and has dedicated herself fully to the Jedi code. Yet, because of her skepticism from a lifetime of being surrounded by deceit and treachery, her complete faith in the Jedi teachings could lead to a great fall if she were to ever question them…

Romance: Male, only if dark side. Willing to do polygamous relationship.

Personal Quest: Eliminates some Dark Adepts who hope to bring about a compromise.

Death: She fights bravely until the 11th level, when realizing that there is no escape she attempts to flee. Ambushed by a band of Twi’lek rogues, she kills most of them until there leader asks her to join them. She accepts only to be stabbed in the back and die begging for her life. 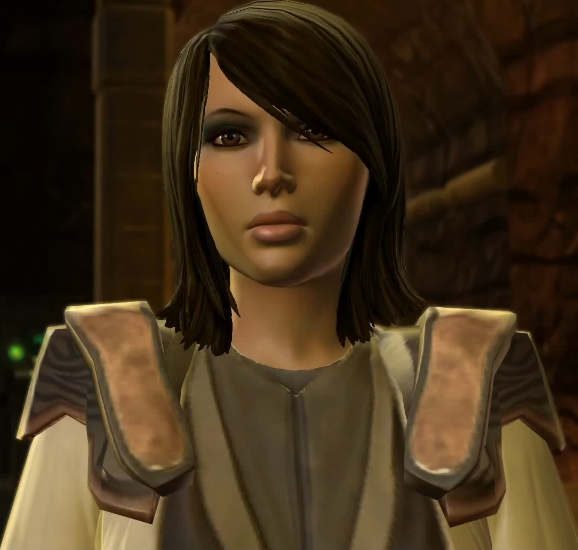