An old man who traveled grew up in the Upper Planes, traveling to the Material Plane in order to try to save the world.

A follower of the Virtue of Compassion who grew up in the Upper Planes (arcadia specifically) with a small humanoid community. When a young man (15), he travled to the Material Plane in order to try to make the world a better place. However, in the 45 years he has lived on the material plane, he has grown somewhat bitter, as he it seems no matter how many people he saves some new evil surfaces to threaten the world, including the death of his beloved wife. Iolo is constantly wavering between retirement and adventuring, normally spending a year or two as a craftsmen before becoming idealistic enough to go off adventuring. Recently his idealism has been sparked again by the revelation that his wife is alive, and he is trying his best to find her.

The Tale of Iolo and the Brigand: a Parable of Compassion was originally featured on the website for Ultima IX, but is no longer available:
Iolo was Bard, bowman and freeholder, as well as the trusted friend and champion of Lord British. It was not strange, therefore, that his neighbors should turn to him in time of crisis.
The nature of the crisis at hand was a single man named Edric, a brigand by trade, who had come to haunt the trails that cut through the wild forests and hills of that region. He was a most cruel villain, with no thought for the lives or honor of his victims, and robbery was the very least of his depravities.

So the honest tradesmen and farmers of the region came to Iolo to beg him for deliverance. Iolo did not hesitate, but put aside his lute and took up his crossbow, kissed his wife goodbye, and left the horses in her capable hands. And as he left, he swore in the name of Lord British that he would not return until the menace of Edric the murderer was removed from the land.

After seeking for some days, Iolo began to pick up the trail of his quarry and it led him into a rough and hilly region where he pursued the villain across the treacherous heights and valleys. At last, they came to a high cliff far above a small mountain village and there, with Iolo only minutes behind him, the brigand executed a plan of horrid efficiency. He pried loose a single boulder and set it to rolling down the cliff face, and as it rolled it caught more rocks and boulders, which in turn caught more rocks and boulders, until at last a mighty avalanche fell down upon the tiny village. Many of the homes and shops were annihilated by the rocky deluge, and the one pass which allowed the village to communicate with the outside world was blocked.

Iolo stood aghast at this carnage, and his rage against Edric knew no bounds, but nonetheless he broke off pursuit and descended down the perilous mountainside to the village, and there he spent some days digging out the living and the dead, and helping to clear the pass. And while he was thus occupied, the brigand made good his escape and returned to his larcenous ways.

But as soon as his conscience permitted it, Iolo resumed the chase, and it did not take him long until he again pressed his foe. But this time Edric was more ready to deal with his nemesis, and he lead Iolo to a certain forest town, and passing through it at night the creature poisoned the town’s only well. So when Iolo came to the town the next day, he found many of the townsfolk stricken with a horrible, deadly affliction. And again Iolo paused in his pursuit and helped to minister to the sick and the dying, and labored to cleanse the fouled well. And again, Edric used the time to get far away.

When he resumed the hunt, Iolo was like a fury of vengeance, and he pressed the fugitive hard. In the heat of the chase, Edric was forced to flee desperately away from all human habitation (which was according to Iolo’s plan). At last Edric came to a cavern mouth and thought to elude Iolo within. But this was folly, for it was no cavern – this was one of those protean pits of vileness called “Dungeons” which have infested our land since time immemorial, and the name of this particular Dungeon was Despise.

Now the perils of the Dungeons are many, and some time later, when Iolo entered Despise (more carefully than Edric had, for Iolo knew the place of old), he was soon greeted by a black and gaping deadfall. And far below, from some unguessed depth of the pit, the voice of Edric was pitifully crying for aid, pleading that his leg had broken in the fall.

Iolo cried out, greeting Edric and saying, “I would happily lower a rope, but I have none.” Then he added, with perhaps pardonable cruelty, “I could go and fetch one if you like; I should be back in no more than a week.”

Edric, who was quite unmanned in his terror, plead with Iolo not to leave him alone. “I know you are a Bard and a man of Compassion,” the villain begged. “Climb down and help me out, I pray you.”

Iolo stood there on the lip of the pit, quite aghast at the audacity of the creature, but at last he spoke. “I see that you, who have so grossly abused my Compassion for so long, have no true idea of its nature. Compassion is the due wage of innocence, and for a child or honest farmer I would cheerfully brave that pit. Such as you, however, have no claim on Compassion whatsoever, for your proper dish is Justice.” But then, as Edric blubbered below, he added, “However, I am no judge or Druid, so I will grant you such Compassion as is prudent for one such as yourself.”

Without another word he went out of the Dungeon, but only so far as a sturdy tree, from which he cut a long branch suitable for use as a crutch. And he returned to the hole from which Edric still blubbered (swearing now that he heard things slithering in the darkness), and threw the crutch down.

“Here then is your Compassion, that you need not wait for death immobile and helpless. With this you can move about, and you already have water, tender, torches and a sword. Now get up, and make your way out if you can. You have my word that if you ever see the open air again, I will be waiting for you.”

Giving no further heed to the brigand’s cries, Iolo left the dungeon. But he pitched a camp in view of the entrance, and bided there two nights, waiting attentively. And on the morning of the third day he broke camp and returned home. And no one can say for certain that Edric perished in the pit of Despise, but it can truly be said that he was never heard of again in Britannia. 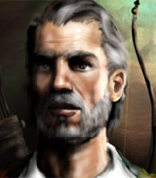