Haer’Dalis is a tiefling actor and planewalker, and a member of the planar faction known as the Doomguard. He doesn’t live anywhere permanently, but most frequently returns to Sigil. He belonged to Raelis Shai’s theatre troupe at one point, and at least at that time, in 1369 DR, stayed on Toril for some time.
Haer’Dalis is one of the party NPCs in the game Baldur’s Gate II: Shadows of Amn and its expansion Baldur’s Gate II: Throne of Bhaal, and one of the more difficult ones to find in the first. The player’s party can accept the task to find him from Raelis Shai after witnessing the awful performance Biff the Understudy gives in his place in her play. The quest involves going down into the sewers of Athkatla and from there entering the abode of a wizard holding Haer’Dalis captive. He will be found within under magical compulsion, which is lifted once the wizard is dead. The player will also be required to acquire from the wizard’s hiding place an item capable of opening dimensional conduits; Raelis Shai first claims it was stolen from her by the wizard, but it turns out that it belonged to him and Haer’Dalis was captured while trying to steal it. Haer’Dalis can join the party right away or go to Raelis Shai by himself. If the player’s party stays with them to help them fight creatures emerging from the different conduits they open in an effort to get back home, they will witness the whole group of actors being kidnapped by bounty hunters. They can then follow them to the Planar Prison, where they will have to defeat the cambion controlling the prison before escaping. At the end, Raelis Shai and the rest of her troupe will continue their travels elsewhere, except for Haer’Dalis who will return to the Prime Material Plane along with the player character.

If Aerie is in the party at the same time as Haer’Dalis, he will start to teach her to act, recognising an unsuspected hidden talent in her. If she is not already romantically committed to a male player character, the two will eventually fall for each other. If both romances develop simultaneously, Aerie will have difficulty choosing, until finally Haer’Dalis will challenge the player character to a duel over her, whereupon she will choose the PC if he ultimately refuses to fight. If Haer’Dalis and Aerie do end up together, she will eventually leave him because of conflict between their respective personalities

Haer’Dalis is the only member of his race available for playing the game. For a tiefling, he’s not physically very different from a human or elf. From humans, he differs in having pointed ears, bluish hair and some stripes on the skin of his face. He also has an unsettling aura that makes Primes nervous. Mentally, however, he is as both a tiefling and Doomguard (and actor) quite alien. He seems quite unconcerned about anything that happens around him or to him other than to appreciate it as an experience. He likes to speak in flowery metaphors, calling himself “this Sparrow” and others with such names as “my Raven”. The Doomguard believe that the entropic decay and annihilation of everything is not only inevitable but downright desirable, and Haer’Dalis not merely believes this philosophy, but thinks and feels fully accordingly. He is also capable of intense emotion, much as he portrays it on the stage, and feels that such things are important, but ultimately he doesn’t care about anything with the kind of urgency “normal” people do, and accepts with little sadness that everything will pass and yield to entropy. Thus, for example, he is willing to fight to death over a love he in no way believes will last. (Both of the possible occasions where Aerie will choose to leave him involve her deciding that, for all his apparent emotion, he does not truly care for her after all.) Besides of being an actor, Haer’Dalis as a blade is an unusually skilled fighter for a bard, capable of going into an effective offensive or defensive dance with his weapons – at the expense of the effectiveness of his bard song. He has his own two personal short swords, called Chaos and Entropy.

Romance: He can be romanced very easily by any women with charisma at least 13, however, he will not stay with anybody unless they also have a Chaotic alignment.

Personal Quest: He needs to free a band of his Doomguard companions from a band of Harnonium who are trying to forcibly change their personalities

Death: Dies fighting against a trio of Barbed Devils 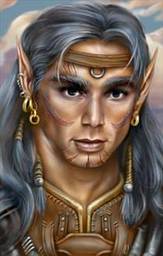