Gwenno was a commoner of Planetouched birth when she met Iolo, with home she got along wonderfully. After traveling together in an adventuring party, the two were eventually married and settled down, though their frequent traveling led to no children being produced from the union. The more down to earth and piratical of the two, she never truly settled down whenever Iolo retired, either traveling to local courts or trying to act as a vagabond do gooder in the nearby woods. During one of their frequent retirment periods, she was captured by slavers and taken away through a portal to a far off realm. She was able to escape and kill her captors, but is totally lost and has no idea of how to get back home.

Joining the Party: Gwenno will be found playing a song for small street children, and will join any group who are willing to donate money to the children and express an interest in adventuring. If anybody has any indication of where her husband is, she will try to find them instantly. 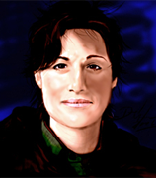