A First to a powerful exiled noble.

Death: After his master was lost fighting Darkspawn, he was able to fight his way through their ranks only to discover that the Carta was planning of using the Dark Spawn attack to launch a sneak attack on the Allies. He set off a great deal of explosions and lead the Darkspawn to their base, and while the carta won the ensuring fight, he was uncovered. Despite this, we was able to kill a great many Carta before finally dying, and ruined their sneak attack plans. 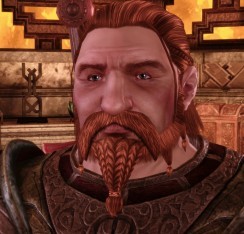