Hoe of Destruction
Accidental glory. One of the most recent magic items created, this once ordinary hoe dates back to only a few years ago when one of the first mages (a bush mage of no real merit) to succumb to the illness that now plagues all mages, was asked to both repair a broken hoe for a local farmer and enchant a sword for a warrior. Unfortunately, his perhaps-never-to-be-repeated-enchantment has made this hoe one of the better melee weapons around today. This hoe can be distinguished by it distinctive red, glowing head. Be wary if thou dost ever face it.

This +7 Hoe Deals 1D12 damage +7 normally, and any critical threat it makes automatically deals triple damage, which is only increased with a critical hit. It overcomes all non divine damage reduction.

Winter Cloak- This Cloak renders the wearer immune to hypothermia

Loriel’s Gift- This magic artifact was once worn by the Avatar, granting the wearer +10 strength

Gauntlets of Quickness- These +1 Gauntlets grant a +10 to initiative.

After his defeat of the Dragon (see below) Geoffrey was determined to become a great hero. He rose to renown winning tournies and serving his kingdom, always famous for his bravery. Finally, he was tasked with exploring the border territories of Britannia, in order to find lost dungeons and clean them out so they cannot harm decent folk. He can be found in one of these dungeons, and will gladly welcome aid.

Approval: Good Actions, and blue actions. He finds humility and kindess extremely important and values Personal integrity though he isn’t adverse to lying.

Friendship: Anybody who will philosophise with him, specifically in regard to war but also the concept of the virtues, though he finds history fascinating as well. He also is a big fan of family values, and can be a tad conservative. He loves kids

The Tale of Geoffrey and the Dragon: a Parable of Valor was originally featured on the website for Ultima IX, but is no longer available:
Of old, in the days when the great Dragons still flew freely about the skies, there was a dragon called Ignus. Now dragons are subtle and dangerous creatures, but as a whole they are not truly evil, for they have their own way to follow, and honor after their own fashion. Ignus, however, was an exception, and in fact I believe he was the source of many of the popular libels which are spoken about his race. For Ignus was a mischievous and rapacious beast, and he took great delight in plundering and ruining the habitations of humanity. He even had a taste for the flesh of human youths, particularly females, which habit I am sure his fellow Dragons found very nearly as distasteful as we do.
So it came to pass one day that Ignus woke to find himself both hungry and bored, and he bestirred himself and off he flew, in search of amusement and sustenance among the habitations of men.

On this day he chose a hamlet so small that it had no name (or if it had one, it is long since forgotten). And this particular cottage was the home of a youth named Geoffrey, of about 14 years, and his sister Marguerida, who was a few years older. On this day they were both engaged in pulling weeds in their father’s bean field, which was located some distance from their home.

Dragons have the most amazing eyesight, far more keen even than an eagle’s, and huge as he was flying through the clouds, Ignus saw the brother and sister long before they saw him. “Aha,” he thought to himself, “Here’s a bit of sport indeed, and a decent start to my luncheon as well. I shall devour these tender younglings first, and then have the rest of this nest of humans as my main course.”

Ignus could easily have swooped down and blasted the pair before they had any idea he was above, but as I mentioned he was bored, and preferred to play with his food a bit. So he descended with a mighty roar, and blasted the innocent bean field with flame, to get his quarry running.

And run they did, you may be sure. For all their youth, they were not fools. Geoffrey sized up the situation first, and led his sister towards the banks of the nearby river, where he hoped to find a crack or crevice in the rocky banks which might shelter them. It was a slight hope, at best, but a far better chance than the certainty of the dragon’s jaws.

Despite himself, Ignus could not help but be impressed with the cleverness and agility of his prey, which dodged and clambered away from him most cunningly. Indeed, several times the dragon prepared a fatal strike, only to have the young humans slip away in some improbable fashion. Ignus was not greatly put out at the inconvenience, for he knew there was no safety for his prey, however long they might wiggle away.

As they approached the river, Geoffrey and Marguerida dodged around the trunk of a gnarled old oak, and there disaster struck, for Marguerida caught her ankle in a twisted root. She fell, her foot wrenched, and still securely caught. Geoffrey tried to help her up, but it was useless. Ignus paused some distance away to catch his breath, watching their distress in polite amusement.

Seeing that there was no way to free his sister, Geoffrey unsheathed his tiny shepherd’s knife, and picking up a fist-sized stone in his other hand, stepped between the old dragon and his sister, with a warrior’s determination on his young face.

This delighted Ignus no end, and he called out to Geoffrey saying, “What now, Sir Knight, do you hold an enchanted sword virtuous enough to take my head?”

Geoffrey replied, surprising himself with a voice much stronger than he had thought he could muster. “Knight I am none, old lizard, nor do I wield enchantment, but you shall not take my sister unless you first face me. Your head I will take gladly, should chance offer it to me!”

Ignus chuckled at this bold speech. “You must be a most stupid child, to think you can harm me with such trivial trinkets. Run, boy, run! Perhaps you shall find shelter, while I am distracted in devouring the girl.”

“I know that I do not possess the skill or gear necessary to harm you, old lizard,” Geoffrey replied. “But that signifies nothing when my sister is in danger.”

Ignus began to find the conversation tedious, and spoke in some irritation. “Here boy, look, your logic is greatly flawed. I shall have your sister if you run or no. Why give me two, when it could be one?”

“I do not dispute your logic,” Geoffrey replied, a feeling of fatal inevitability weighing upon his heart. “Yet there is no logic that would suffice to make me abandon my sister to one such as you.”

Old Ignus was a creature of treachery himself, and at this a tiny blossom of doubt bloomed in his cold heart.

“I start to see,” he growled. “Since there is no reasonable cause for you to stand where you are undefended, it is reasonable to suppose that you remain because you wish me to approach. Perhaps that tree is where you little humans have set some snare, curse or ambush to take me unawares.”

“Again, I do not dispute your logic,” replied Geoffrey who, as I have mentioned, was no fool.

“Then again, you may just be trying to bluff me,” mused the dragon. “In fact, that is rather likely. Nonetheless, if there is a trap, and it is well set, I may be harmed or even killed. On balance, I do not believe you are worth the risk. No, certainly not!” And with that, to the amazement of both Geoffrey and Marguerida, the creature rose into the air and soared off, in search of some less (as he supposed) chancy meal.

So it was that Geoffrey showed true Valor, which is the pure distillation of the Principle of Courage. By setting his life at no worth, he saved it. Had he valued his survival enough to run, as the Dragon’s logic suggested, the creature would surely have devoured first his sister, and them him. He stood his ground according to the need, rather than the consequence, and though he could easily have died, on this occasion his Valor saved him and another.

As for old Ignus, he set the value on his own hide so high that he could not bear even the tiniest risk or doubt, and so he missed an easy meal. But the price of his cowardice was greater than that. For after a few years Geoffrey grew into a most puissant young champion, a knight indeed, and he went forth in full gear (bearing a most potent magical sword), at the height of both skill and strength, and he slew old Ignus. And he hung the dragon’s head over his stable door, where the children of his sister often cast rocks at it for sport.

Death: Dies slaying a legendary Dov (Skyrim Dragon) that tried to take the tower he was fighting upon. 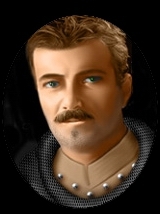