A young naive bard who wants to find adventure.

Garrick explains that he was part of a celebrated acting troupe called the Dale Wind Troubadours. They traveled the length of the coast from Neverwinter to Amn and often played to Dukes and other nobility. Indeed, few others could afford the cost of a performance when the group was at its peak. Garrick does not speak fondly of this time however, as the direction the group was taking left him dissatisfied with their conduct. He apparently discovered that performances were being used as distractions for theivery and declared he would have nothing to do with it. Rebuffed by his comrades, now he wishes simply to travel and play his music for those that will listen. He seems a bit young and naive, and a touch too ready to take the word of a stranger.

Personal Quest: He comes across his old group, who are trying to con the poor people they are performing with.

Death: Dies in the battle killing a pair of Orgillon 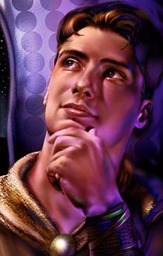