A hagborn who thinks they are a hagspawn and really likes girls.

The product of a hag and a human who actually loved each other, his mother’s coven forced her to choose between eating him and eating her lover (she choose the latter).

As a constant wanderer who had never felt attachment to anyone, Gann can be charming and acerbic all at once. He dodges questions with clever remarks, but is nonetheless a trustworthy companion who accompanies the Kalach-Cha in the quest. He enjoys casual banter, and can appear to be quite vain, despite his abilities to “see spirits”. He is very aware of his appeal to the females and uses this to his advantage, but seems to have become a sort of a pariah amongst the Mulsantir farmers with daughters and wives.
As a faithless, Gann holds the deities in contempt, seeing them as master manipulators, and has more faith in spirits instead. Despite this, he seems to be greatly troubled when he encounters the Wall of the Faithless. Gann’s history becomes clear during the events of the campaign; his mother, Gulk’aush, was a Night hag from Coveya Kurgannis who had betrayed the sisterhood by falling in love with a human male. As a punishment, the hag was forced to consume her lover, and the infant Gannayev was cast out into the wilds of Rashemen. He is very bitter about it, believing that his parents did not love him, but is shown the truth in when the party chances upon the mad hag. They eventually reconcile, much to Gulk’aush’s joy, but Gann never meets Gulk’aush again during the campaign. The Kalach-Cha and Safiya chance upon Gannayev when they are trying to recruit anyone who is willing to aid the protagonist against Okku the bear god, who had marched upon the gates of Mulsantir to fulfill his oath to stand guard against the Spirit Eater. Gannayev was the only one who agreed to join, and proved instrumental for their victory. Later on, he proved to be instrumental again when he used his talents as a dreamwalker to escort the player into the dream sequences where Akachi’s dream fragments lie dormant. He eventually accompanies the player into the Fugue Plane, where the player must decide whether to wage war against the Kelemvor, the God of Death who reigns supreme on the plane, or side with him and quell the rebellion.

Death: Dies fighting against a coven of Night Hags 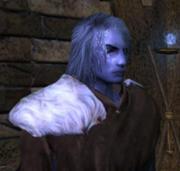