Forgrimm is a tough Dwarven warrior who can take a fair amount of punishment and also knows how to hand it out. He is not keen on ranged weapons and prefers to rely on his axe, which he also uses to stun or knock his enemies to the ground.

Forgrimm is the embodiment of a dwarven mercenary. He used to be Ardo of Boarstocks bodyguard. When Ardo was murdered, which Forgrimm could not prevent, he fell into a deep depression and started drinking heavily at The Silver Pitcher, where the party finds him, completely drunk. Out of pure guilt over Ardo’s death Forgrimm even shaved his beard into a shameful beard. It is worth mentioning, though, that according to Forgrimm’s statement, Ardo asked him to let him go alone to the meeting. So Forgrimm was not present when Ardo was attacked.

You can sober him up with an Extra strong Special Dark ale from tavern owner Tradan Brewmore.

Death: Dies fighting against a band of Drell, since he is REALLY pissed off 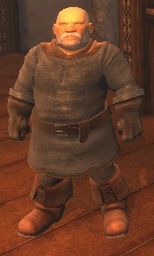