A fugitive elf slave who has been experimented upon

It’s the helmet of Garahel, the elven Grey Warden hero who killed the archdemon Andoral during the infamous battle of Ayesleigh in 5:20 Exalted, the battle which ended the Fourth Blight.
I watched from across the battlefield as Garahel struck the final blow against the Archdemon and a great wave of energy surged out from the beast.
It was enough to level what buildings were not already destroyed by the endless battle we had fought, enough to knock horses and ogres aside as if they were little more than parchment. Even at my distance, the force struck me like the blast of some great storm. The darkspawn around us felt it too, as savage desperation turned to sheer terror.
A great pillar of energy rushed up into the dark clouds, the blackness that had gathered with the horde and blocked out all glimmer of hope. When we stood again, we saw the first rays of sunshine peeking through those clouds and we let out such a cheer of joy and relief that it shook the very earth. I joined the others as we searched for Garahel, but as the eve approached all I found was his enchanted helm. It was not until much later that I heard his body had been retrieved, flung to the far side of the battlefield by the Archdemon’s death throes. My friend, this elf who helped us unite the lands and cleanse Thedas of the darkspawn scourge will always be remembered. I swear it.

—Excerpt from a letter written by the Grey Warden Prosper, 5:24 Exalted

Beregrand’s Breast Place
+3 Full Plate, +1 to all stats
Beregrand the Bold was either a hero or a traitor, depending on how you look at it. Before exile was common among the dwarves, only the most heinous crimes warranted a dwarf being stripped of house and sent to the surface. Beregrand qualified and was banished on accusations of regicide after killing a dwarven king on the Proving Sands. Beregrand spat on the Assembly that pronounced his sentence before strapping on his armor and leaving Gundaar.
Living on the surface, Beregrand’s incredible fighting skills, tactical knowledge, and intellect built a naval empire centered in what would one day be Antiva. His more enduring legacy was teaching human smiths, engineers, and other crafters jealously guarded dwarven secrets. Cursed by dwarves and hailed by humans, Beregrand became a figure of much controversy.
As complicated as his life was, the story of Beregrand’s armor is even more checkered. His armor has passed through many heroes hands over the centuries. Despite the advantages it gave them, no hero using it ever survived to old age.

Tranquility
+1 to all Stats

Orana was brought to the Circle of Magi in Kirkwall at the age of five. Her mentors had high hopes for the child, seeing her talent for magic. Unfortunately, the poor child was plagued by nightmares that only worsened after her move to the Gallows.
Orana became afraid of falling asleep. She would lie stiffly in bed, her eyes wide open. Without sleep, she grew thin and wan, and her studies began to suffer.
Orana began to experience waking dreams. Shadows flitted in corners, and she swore she heard voices calling her name. She knew demons could take advantage of her vulnerable state, and at the tender age of eleven, she requested to be made Tranquil. The first enchanter complied.

With her connection to the Fade severed, Orana was again able to sleep. Her health returned, and she was at peace with her decision. She continued her education at the Circle and excelled in enchanting and runecrafting.

Orana saw the Rite of Tranquility as a gift, although many mocked her for this view. Later in life, she created an amulet to remind her of the Rite. She named it Tranquility. The Tranquility Amulet soothes the mind and imparts a general sense of well-being to its wearer.

Air of Confidence
+1 Will, +7 Hit Points
After averting a disaster at the Circle of Markham, Evra was given this ring by the first enchanter. Though the Air of Confidence is not as eye-catching as his other famous ring, it is said that Evra always wore it, even when sleeping. The exact magical properties of the Air of Confidence are a subject of much speculation amongst minstrels.

Ring of Whispers
+1 Cunning, +1 weapon speed
Listen. Do you hear it? A soft swish, barely audible. No? Some hear it, some don’t–well, not right away. But in the end, everyone does. It comes from this ring. “Old as creation,” the Dalish I bought it from said. You can see the Circle’s marks right here, barely. When I heard the sound the first night, I grabbed my sword and called out, “Intruder!” But there was no one. Just the ring. Did some research after that. A mad Formari made it. It’s powerful, to be sure. One scholar thought that if you could only make out the whispers, you’d learn… something. The ring was pried out of his hands, and he begged and pleaded that they return it. He claimed he could almost hear it, understand it. One thing’s for certain: there’s more to this ring than meets the eye.

In Kirkwall’s seedier quarters, fortunes have been built on the slave trade. This ancient dwarven blade undoubtedly commanded a high price, but Hayder could clearly afford it. Who says crime doesn’t pay?

Hindsight
+1 Armor, 50% Fire Resistance, 50% Nature Resistance
There are more famous swords than you could count, there are helms beyond numbering, and there are breastplates, daggers, and even mystical footwear that roll immediately off the tongue. There are storied rings, gloves, and even bags invoked around a camp’s common fire. But belts? There are very few noteworthy belts. It was here that the dwarf Thaulid Hammerspur decided he would make his mark. Here, he thought, between the tunic and the trousers, I will stake my claim.
He was familiar with the state of the art, of course; as an artificer making a name for himself in Orzammar, he had access to the typically robust record-keeping of the forges. He knew of the Drunkard’s Cinch and the Pouchpaw, but there was no poetry to them, no lineage. They were parlor tricks, the domain of hawkers and pawns. He wanted a belt whose buckle gleamed with purpose, but what purpose? He worked on it from time to time, waiting for inspiration to strike. In the meantime, he needed something to keep his pants above the knee and though he might as well wear the damned thing.
And he did so until, after an especially memorable night at Tapster’s Tavern, he managed to fall into his own forge. Shoveling out his remains, they found among the grey ashes his belt, somehow mercifully preserved.

Hindsight is a belt possessed of a strange, slow intellect. Whatever would have killed the wearer, does, and at the very moment, the belt develops a resistance that would have saved it owner. No one knows how Thaulid managed this, and at this point, it would be difficult to ask him. When the belt is held in the light, just so, the leather, reveals a grisly catalogue etched in glinting lyrium:

Thaulid Hammerspur, fire.
Gorgut the Wizened, poison.
Vil Arak, stabbed forty-three times.
Haliath Baronet, witches.
It went on like this for many years, until it fell into your possession. Your temporary, temporary possession.

An enchanted replica of the blade Archon Hessarian used to slay Andraste as she burned—an act of mercy that he said the Maker commanded.
Of course, the Tevinter Imperium did not become part of the Chantry until well after its formation centuries later, so the first of these blades was created in 2:2 Glory as a gift from Archon Therion to his general, Lord Galineus, for battles fought at the height of the Second Blight. Since then many archons gave similar gifts and it is seen as a badge of honor within the Imperium—though more than one of these blades have ended up on the black market, either stolen or sold by the recipients when their family fell on hard times.
Ironically, one of the four swords found impaled in the body of assassinated Queen Madrigal of Antiva in 5:99 Exalted (thus inspiring the Age of Steel) was a Blade of Mercy. It was a great sacrilege to the Chantry.
—From Codex entry: Blade of Mercy

Death: Slipping across enemy lines to attack two dozen full mages. He is able to kill 25 before finally dying 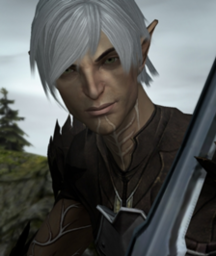