“The son of refugees made homeless during the Great War, Lieutenant Felix Iresso has been a career soldier for many years. His file shows participation in several notable battles, including the so-called Eight-Hour Invasion of Dubrillion where Republic forces repelled an Imperial invasion force with minimal reinforcements. Since then, Lieutenant Iresso has earned excellent technical scores and commendations for exemplary service. However, his file also contains some discrepancies. Lieutenant Iresso has one of the highest transfer rates in the Republic military, serving under almost a dozen commanders across the galaxy in two years. The lieutenant has also been overlooked for promotion several times. The only explanation from his superiors is a reference to an incident on Althir where Lieutenant Iresso was captured by the Empire, but no details are given.”

A career soldier with an intense sense of duty, Lieutenant Felix Iresso has seen some of the most brutal conflicts in the galaxy. Iresso was born on a small world near the fringes of Republic space. Fleeing the Sith advancement, his family left their home and spend the next several years bouncing from one planet to the next, never allowing themselves to settle down.

When Iresso was of age, he enlisted in the Republic army. Early in his career, Iresso was a favorite soldier among the higher command echelon; a stern, by-the-books soldier who never disobeyed orders and did whatever was necessary to defeat the Empire. As his notoriety rose, so did his responsibility, quickly rising to the rank of Lieutenant.

Though he has received several commendations from his superior officers for his exemplary service record, Lieutenant Iresso has also been passed up for promotion several times, and in two years was transferred over a dozen times. Many leaders see him as a potential liability after he was taken prisoner by the Empire for a short period. Details about his detainment, however, remain classified.

Despite his many setbacks, and his less-than-desirable assignment to Hoth, Iresso remained a cheerful and upbeat man. He did not follow many of the conventional rules for disciplining his soldiers, preferring to punish misbehavior with unpleasant, but temporary, manual labor or extra chores instead of courts martial, time in the brig, or other punishments that would go in a junior officer’s permanent service record.

He responded positively when the Consular chose options supporting the Republic’s higher ideals, or demonstrated a willingness to risk themselves and the crew for a good cause. His maverick streak, however, would assert itself if asked to so something that was lawful, but unethical. In combat, he tended to draw aggravation from the Consular’s enemies, risking himself to take much of the incoming fire so the Consular would not be harmed.

Perhaps because of his wandering across the galaxy and the hostile wildlife he battled on Hoth, Iresso was fond of collecting trophy parts from dangerous beasts. 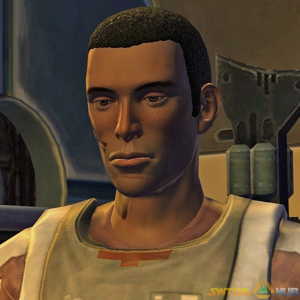