A lithe young woman with stark white hair stares provocatively at you, silently daring you to advance and either provoke or caress her. Her fingernails are overlong and sharpened, and she carries a wooden staff with strange trinkets tied to it. Close by, a red fox watches you warily, ready to defend the woman if necessary.
Feiya’s childhood years were harsh and disturbing, as she was stolen from her home as a young girl and forced to join a coven of hags, who tried in vain to teach her their dark craft. Alternating between tutelage and torture, the witches frequently let their cruel natures impede their instruction. She eventually escaped the witches’ torture with the help of an unusually intelligent fox whom she later named Daji.

Though she desperately desires the company of others, formative years spent away from civilized society have left Feiya lacking in social graces, and her awkwardness often leads to unfortunate misunderstandings. Nevertheless, her inherent good nature tends to win out, and her occasional flares of temper are countered by her steadfast loyalty to her friends. Feiya relishes travel, and having identified a butterfly carving in a waterfall cave as the found-mark of a Desnan priest, she gladly embraces that faith, hoping that her wanderings may cast more light on who she really is—and what entity fosters her magical abilities.

Born in a small village north of Trollheim in the Linnorm Kingdoms, the child who would come to be known as Feiya was the daughter of two Tian merchants from Minkai who had come over the crown of the world to Avistan to start a new life. Travelers by nature, they spent the short northern summers making slow loops through Hagreach and the Thanelands, facilitating trade. What few memories Feiya has of that life are happy ones: the jostling of wagons, the smell of campfires, and wandering alone through fields and forests, marveling as the wildness closed around her.
That happiness came to a sudden halt on the fateful day that brought her to the attention of a recently sundered coven of witches who dwelled on the border with Irrisen. Led by a particularly cruel green hag named Nysima, the coven had lost its youngest member to a squad of Blackravens from Trollheim and was still reeling from its sudden loss of power. They witnessed the child as she skipped away from the caravan stop, following a family of deer deep into the woods, and immediately set upon her.

There’s no telling what cruelties the witches would have visited upon the girl had they not suffered their recent loss. As it was, another, no less horrific, fate awaited young Feiya. The two crones seized the child and whisked her away to the east, their mad cackling drowning out the young girl’s terrified screams. By the time they reached their snow- and thatch-covered huts, they had given the child a new name and were already envisioning the return of their lost powers.

The next twelve years were a blur of pain, terror, and misery as Feiya endured the crones’ sadistic attempts to teach her their dark craft. Alternating between tutelage and torture, the witches frequently let their cruel natures impede their instruction. For while the young girl showed unmistakable promise and aptitude, she also possessed a defiance that only the harshest of punishments could suppress. On numerous occasions, Feiya tried to escape her imprisonment, only to be tracked down and captured after no more than a few hours. The retributions for these failed attempts have scarred her body and mind in ways that no magic can ever heal.

One brisk autumn day, after being beaten for failing to properly brew a batch of poisonous blue whinnis, Feiya was sent off to gather herbs. While harvesting more whinnis root, she spied a fox watching her from atop a large rime-covered rock. Unlike the region’s typical arctic specimens, this creature had a striking red and orange coloration that stood in stark contrast to the endless snow. There was something about the way the creature watched her that beckoned to Feiya. She approached carefully, and was astonished by his calm and focus. As she neared, the fox trotted a small distance away, turned, and gave her a look that was clearly an invitation to follow. This process was repeated again and again, and before she knew it, Feiya was following the fox on another escape attempt.

By sundown, the two witches had realized Feiya’s intentions. Furious, they set off in pursuit, confident that, as with all previous instances, their hunt would be brief. This time, however, Feiya had guidance. The fox led her along trails never before seen by human nor hag, staying always just ahead and out of reach. When she needed nourishment, the fox led her to game and fresh water. When she needed rest, it stood vigil while she slept. In this manner, Feiya was able to elude capture for more than two weeks.

One particularly cold evening, however, Feiya’s luck ran out. With her pursuers hot on her trail and the fox nowhere to be seen, she found herself trapped in a river valley surrounded on three sides by impassable mountains. Feiya could sense the witches closing in, could hear their promises of pain on the chilling wind. She took shelter in a shallow cave behind the waterfall that fed the river, a curious little grotto whose far wall was emblazoned with a crude carving of a butterfly. Like an animal run to ground, Feiya steeled herself for the coming confrontation. She had come too far this time to surrender without a fight. She determined then and there that her days of living under someone else’s yoke were over. She would have her freedom, either in this life or the next.

It was at that moment that the fox reappeared. Only now, there was something different in the way he approached her. He had always shown a preternatural intelligence, but as Feiya stared into his eyes, she saw a consciousness and a determination that would have frightened her had she not come to trust the animal so implicitly. As she watched him, Feiya was startled by a sudden and overwhelming flurry of sensations invading her mind. She sank, dazed, to the cave floor as the feelings slowly crystallized into coherence. Less a voice than a series of emotions, the promise it offered was unmistakable. Feiya said nothing, but her acceptance was as clear as it was quick.

What followed will forever haunt Feiya’s dreams. Raspy promises of pain and suffering rose above the din of the waterfall as the witches drew near to cave mouth. Feiya could see the outlines of their hunched bodies just beyond the blanket of cascading water, but before she could act, another sound arose. It started as a low rumble, then quickly gained volume, drowning out both hags and water and sending tremors through the cave floor. Then the valley erupted with the screeching and roaring of what could only have been a forest’s worth of wild animals, punctured occasionally by the shrill curse of a hag.

Long minutes passed as Feiya stood, too frightened to move. Then, as gradually as it began, the noise subsided until all that remained was the crash of the waterfall. Feiya crouched down behind a rocky outcropping, afraid to leave the shelter of the cave. As the minutes turned into hours, exhaustion claimed her, and, despite her anxiety, she succumbed to a fitful sleep.

When dawn finally arrived, Feiya stepped out from the cave, not quite sure what she was expecting to see. A fresh blanket of snow had covered the land, hiding any clues she might have found concerning the events of the previous night. Yet the feeling of relief was palpable. The fox crept up and paused at her side. She was finally free.

Feiya never discusses the events of that night, nor the particulars of the strange pact she entered into. She may one day try to track down the parents she barely remembers, but for now she is content to roam the world, relishing her freedom, seeking new experiences, and developing her newfound power. Though she desperately desires the company of others, formative years spent away from civilized society have left Feiya lacking in social graces, and her awkwardness often leads to unfortunate misunderstandings. Nevertheless, her inherent good nature tends to win out, and her occasional flares of temper are countered by her steadfast loyalty to her friends. Feiya relishes travel, and having identified the butterfly carving in the waterfall cave as the found-mark of a Desnan priest, she gladly embraces that faith, hoping that her wanderings may cast more light on who she really is—and what entity fosters her magical abilities. 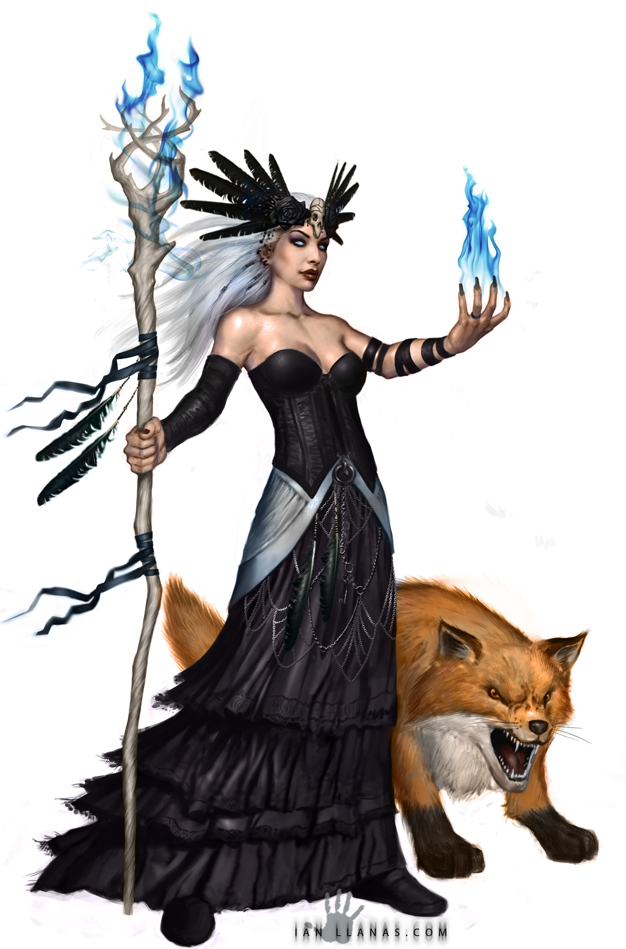