A druid who wishes to overthrow civilization.

Weapon of Choice: Spear and buckler

Faldorn states that she was the child of a Black Raven Uthgardt woman. As an infant she was given over to an enclave of Shadow Druids as an offering, and was thereafter raised according to their beliefs. A splinter group of the main druidic order, Shadow Druids engage in very aggressive protection of nature, often relying on violence to achieve their aims. Faldorn showed great promise as she approached adulthood, and the order decided to send her to the Sword Coast to test her devotion to their ideals. Her ongoing mission is to use any means available to stop the despoiling of nature, no matter the risk or the cost to her life or any other. Faldorn is a member of the Shadow Druids, a militant sect of druids that believes in the violent struggle of nature against man. She disagrees vehemently with Jaheira and her mainstream druidic views of man co-existing peacefully alongside nature. However, despite her militant beliefs (and extremely aggressive character portrait), Faldorn’s speech and behavior in Baldur’s Gate is surprisingly mellow and laid-back. She can be found in the Cloakwood forest fighting against the Iron Throne.

Personal Quest: A band of Poachers are hunting in her forests, and have killed the druids trying to fight her. She appeals to the PC for help

Death: She dies fighting against a band of Worgs 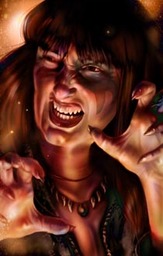