Estra never wanted to commune with spirits: she only wished for others to believe she did, and profit from that belief.

Estra forms an ectoplasmic wall.
Born the daughter of a poor miner in the nation of Isger, Estra dreamed of the theaters of far-off cities, and more than once nearly ran away with a traveling acting troupe that stopped in her small town. Fortunately, her family moved to the capital city of Isger, Elidir, during her teenage years, and she swiftly became enthralled with her new, cosmopolitan home. Her dreams of joining the theater were even somewhat fulfilled when she fell in with a small gang of faux-spiritualists who needed a convincing actress to play the role of their spirit-channeling medium. The group engaged in fraudulent séances targeting grieving mourners, who paid dearly for confirmation of the smooth passing of their loved ones into the hereafter.
Within darkened chambers and ramshackle theaters, Estra and her confederates spent nearly ten years bilking grief-stricken folk with the promise of communion with their dead relatives. Estra proved a talented actress, falling into convincing trances to channel the dead and dispense the carefully gathered information her associates had gleaned on their targets. Sessions typically culminated with the full-form “manifestation” of a bereaved subject’s lost relative: actually a confederate dressed in luminous robes and clumsy disguises approximating the dead person’s appearance.

The arrival of a handsome knight named Honaire changed all that. Stationed in Elidir, Honaire had left behind an ailing mother, and in his absence she had passed. Honaire sought some comfort in his loss, and turned toward the séances of Estra’s troupe for assurance that his mother rested in peace. Relieved of his grief by the assurances of the spirit-seer, the young knight became smitten with Estra’s quick wit and streetwise charm. Estra, for her part, found the knight’s combination of physical strength and gentle courtesy enchanting, even as his strict code of honor made her regret her own life of lies. When at last she confessed the truth—that she had never contacted Honaire’s mother at all—she expected him to fly into a rage. Instead, he thanked her for her courage, and promptly proposed marriage. Accepting his proposal, Estra left behind the life of a charlatan, and the two spent several happy decades together, with Estra enjoying the social status that came from being the wife of an up-and-coming military commander.

Yet this life, too, came to an abrupt end when rumors of a rising alliance of goblin tribes reached the capital. Seeing her husband’s frustration at the government’s slow response, Estra urged him to volunteer to investigate, with no way of knowing that the goblin assemblies were in fact the precursor to the deadly Goblinblood Wars. There in the dark expanse of the Chitterwood, Honaire and his unit were unexpectedly ambushed by a horde of maniacal goblins and their green dragon ally. Though he fought bravely and saved the lives of many comrades in their retreat, Honaire was bathed in the dragon’s toxic breath, his armor and body rent by the beast’s deadly claws.

Wracked by guilt and loss, set adrift in a devastated nation that suddenly had more to worry about than the plight of military widows, Estra turned back to her old means of supporting herself, training several new associates in the tricks of the faux-spiritualist trade. Yet during the group’s first performance, while her confederates secretly lifted spirit trumpets with thin threads and caused tambourines to shake as if by unseen forces, Estra’s fake trance became something more. A wispy, greenish vapor coalesced from her mouth, eyes, and nostrils. To the wonderment of those assembled, a spectral figure emerged through the curtain of ectoplasmic mists. The ghostly apparition was not the luminous confederate Estra expected to emerge from the spirit cabinet, but rather the very real specter of her fallen husband. Both comforted and shamed, the burgeoning spiritualist pledged once again to never allow deceit to rule her life.

Though her body is increasingly stooped by age, Estra has learned to strengthen her spiritual bond with Honaire so that his ectoplasmic form might walk the world again. She tries to emulate her lost lover’s selfless drive to aid the helpless wherever they might be afflicted—though her impatience and sharp tongue sometimes get the better of her. Wandering far from Isger, she uses her strange powers to provide comfort and consolation—for real this time—to those who have lost loved ones to the ceaseless violence of the world. Yet all the while, she remains plagued by doubt, wondering if her phantom husband’s presence is the result of the depth of their love, some god’s attempt to shepherd her toward righteousness, or a manifestation of her own guilty conscience. 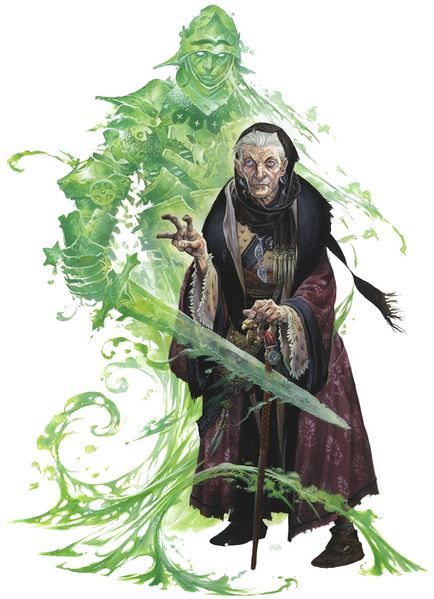