Erasmus was born the youngest scion of a minor noble house in Caliphas, Ustalav’s capital. Along with his five older siblings, he enjoyed the benefits of a fine education and practice in horsemanship, swordplay, and tutelage in the arcane arts. Yet he understood he had little hope of ever claiming ancestral holdings or heirship. He spent his early life in the cosmopolitan pursuits of the idle rich, and he seemed destined for some opportune marriage to secure his family’s comfort, with the resulting life likely to be one of bored leisure.

As Erasmus left his teenage years behind, though, the heirs of his family began to mysteriously die. Authorities discovered Nissa, his eldest sister—a cunning duelist—slain in some underground fighting pit by an opponent she severely outmatched. His uncle, a skilled magic-user, was torn apart by a summoned creature in his own occult library, while the corpse of his son was found broken below his high tower. His second sister, Veldira, choked to death on porridge in the Pharasmin cathedral where she served. Erasmus’s closest confidant, his sly older brother Baylock, was found hanged in a dark alley in what authorities ruled a suicide. Amid the turmoil of the deaths, Erasmus’s father began to waste away in his council chamber, while the family’s eldest surviving heir, Erasmus’s brother Vinn, took control of the family affairs.

It wasn’t long before the voices started.

At first they were the faintest whispers, which Erasmus dismissed as sleep-deprived hallucinations or echoes bouncing through the corridors of his family’s estate. But with each new death, the whispers grew stronger and their message clearer: “Murder.” Erasmus ignored the ghostly mutterings as best he could, quietly writing them off as the lunacy of grief. But, with his suspicions aroused, he began to investigate the whispers’ claims. Erasmus told no one of the subtly altered summoning circle he found in his uncle’s chambers, or of the oily residue that failed to wash from his father’s used silverware. The more he discovered, the more intense the chorus of voices grew in his crowded mind. Servants concealed Erasmus’s late-night wanderings as best they could, or dismissed his mutterings and wild ravings as overwhelming grief.

It all came to a head when one of Erasmus’s episodes interrupted his own father’s funeral. Snapping his head back and forth, Erasmus railed against a chorus of unseen phantoms. Amid the outburst, he howled that his family was victim of his eldest brother’s deceit.

None who heard truly listened, though, all convinced that grief had pushed Erasmus past the brink of insanity. Vinn, Erasmus’s only remaining family member, committed him to Havenguard Lunatic Asylum.

For nearly a year, Erasmus languished at the asylum, baffling his well-intentioned wardens as they sought to heal the man’s troubled mind. But on the anniversary of his father’s death, another voice called through the darkness. From a neighboring cell, a new prisoner calling himself “the King” counseled the troubled man. With gruff kindness, the stranger with the accent of a northern barbarian taught Erasmus not to fight the chorus, but rather to accept and welcome it, opening his mind and body to its words. Erasmus gradually identified each mysterious voice in turn, and finally understood they were the shades of his family—the spirits of his deceased brothers, father, and uncle—who endlessly dwelled upon the circumstances of their deaths. Over time, he learned to sit in quiet communion with the voices, and to allow them to exercise their influence upon his mortal shell.

With the aid of his uncle’s mastery of magic, Erasmus easily retrieved the keys to his cell to secure his escape. Under the control of his battle-eager eldest sister, the asylum’s guards had no hope of restraining him. But when he gratefully burst open the King’s cell, he found it empty. Too harried to ponder the implications of his friend’s disappearance, Erasumus fled, relying on the influence of his roguish brother Baylock to slip through the shadows to freedom.

Yet, the world had not changed for the better during Erasmus’s absence. Vinn had used his brother’s madness to legally disown him from any claim to his family’s titles or lands. His murderous brother had also married into a prestigious noble family, solidifying his holdings and winning him considerable influence in Caliphas’s royal court. Seeing little chance at justice, and now questioning the source of the mysterious voice that had counseled him back to sanity, Erasmus knew he’d need living allies to retake his birthright. He boarded a ship crossing Lake Encarthan, the restless spirits of his ancestors following close behind 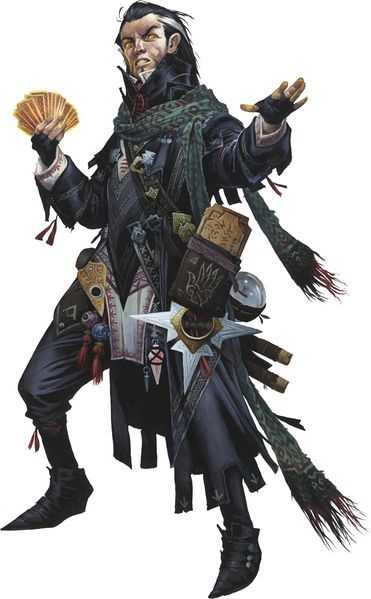